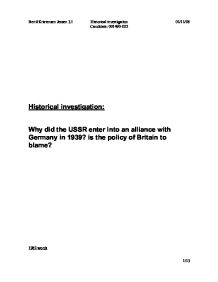 Historical investigation: Why did the USSR enter into an alliance with Germany in 1939? is the policy of Britain to blame? 1982 words A)Topic: Why did the USSR enter into an alliance with Germany in 1939? is the policy of Britain to blame? Plan of the investigation: In spite of negotiations with Chamberlain over an Anglo-soviet alliance previous to 1939 Stalin chose to ally himself with Hitler. His decision came as a shock to many, who saw Hitler as a turncoat after his recent breaches of the Versailles treaty and unwillingness to comply with international pressures demanding his troops continued absence from Poland. The aim of this investigation is to discover the reasons for Stalins cooperation with Hitler and whether or not this alliance could have been avoided by the British. The investigation will uncover the reasons for the failure of the Anglo-Soviet talks, and Stalin's potential gains from entering either alliance, mainly documented by a transcript of the secret clause added to the non-aggression pact formed and an extract from Neville Chamberlain's personal diary. (150 words) B)Summary of evidence: 1. Chamberlain and the Russian talks Throughout the later part of the 1930's Hitler broke the Versailles treaty by expanding the German army rapidly. The Munich Conference of 1938, that led to the Germans reclaiming Sudetenland, made Stalin fear that the allies appeasement policy would be followed in relation to the fate of the USSR at a later point.1 In October 1938 Ribbentrop proposed a renewal of the Non-aggression pact with Poland, in exchange for the city of Danzig and the establishment of a motor- and railway system, that was supposed to enter polish territory. This proposal was denied by the polish, and led to Hitler contemplating a military invasion.2 Stalin thought that Hitlers eventual goal was ...read more.

The British were reluctant to interact with the Soviet government, and the request for an audience with Lord Halifax, the British Foreign Secretary, in Moscow was met with a refusal. However eventually the British sent the minor official called Reginald Ranfurly Plunckett-Ernle-Erle-Drax.13 This sort of "diplomacy of convenience" angered the soviet government, who felt that they where entitled to have a word in regards to when and where, negotiations were to be made. Stalin considered negotiations with this low level official an insult, and sent him back. So in this respect the British effectively pushed Stalin towards Hitler, with their continuous delayed reactions, and their low prioritization of the Soviet Union. Why Stalin found the Nazi deal necessary: The failure of Stalin's approaches to the British, had effectively led the Soviet Union to face one of two scenarios. They could attempt to fend off, what Stalin assumed was an eminent attack on two fronts by the Germans and the Japanese, or they could align themselves with Germany in a mutual non-aggression pact which Stalin thought would buy the soviets the time to prepare for war with Hitler14. In spite of Hitlers impression on Stalin, he earned himself some goodwill on a previous occasion when Soviet spies uncovered information that suggested the Japanese had been discouraged by the Germans from attacking the Soviet Union. This information not only implied that Hitler could be trusted to some extent, but also that he rejected the idea of an immediate war with the Red Army. 15 The attraction of a deal with Hitler was that the proposal involved a promise of the soviets gaining territory in eastern Europe. The idea of a Non-Aggression pact with Germany was certainly an incentive, but unreliable at best. ...read more.

12 This notion seems rational as Chamberlain had obvious grievances with both the Hitler and Stalin, and that Britain would benefit from not having to face the totality of either's army. 13 But this only happened after Hitlers behavior towards Poland suggested that the country might be the next in his series of hostile takeovers and the British envoy had no authority to make any decisions, and was transported by a slow moving boat rather then airplane, which seemed like a deliberate attempt at delaying his arrival. 14 He felt that an armed conflict with Hitler was unavoidable in either scenario. 15 Along with Hitlers focus on the creating the Pact of Steel with Italy, this information led Stalin to believe that the Nazis main focus was Central Europe, and that his initial main enemy was Japan. 16 Stalin Quote: Of course, it's all a game to see who can fool whom. I know what Hitler's up to. He thinks he's outsmarted me, but actually it's I who have tricked him. 17 Stalin acknowledged that without an immediate eastern front Hitler would progress to central Europe, where he'd be forced to battle Britain and France 18 Extract from Isaac Deutscher's Stalin (1949): To his mind the war was inevitable anyhow; if he had made no deal with Hitler, war wound still have broken out either now or somewhat later, under conditions incomparably less favourable to his country. His purpose now was to win time, time, and once again time, to get on with his economic plans, to build up Russia's might and then throw that might into the scales when the other belligerents were on their last legs. Bertil Kristensen Jessen 3.I Historical investigation 01/11/08 Candidate: 001490-022 12/12 ...read more.