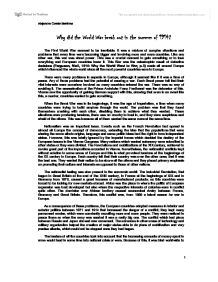 Why did the World War break out in the summer of 1914?

Why did the World War break out in the summer of 1914? The First World War seemed to be inevitable. It was a mixture of complex situations and problems that every time were becoming bigger and involving more and more countries. Like any other war, this war was about power. This was a crucial moment to gain something or to lose everything and European countries knew it. This War was the catastrophic result of defective decisions (Ferguson, Niall, 1914: Why the World Went to War, p.3) made all around Europe which influenced the whole world since all the most powerful countries were in Europe. There were many problems in aspects in Europe, although it seemed like if it was a time of peace. Any of those problems had the potential of causing a war. Each Great power felt that their vital interests were somehow involved so many countries entered the war. There was no way of avoiding it. The assassination of the Prince Archduke Franz Ferdinand was the detonator of this. Vienna saw the opportunity of gaining German support with this, showing that even in an event like this, a murder, countries wanted to gain something. ...read more.

The leaders of all the countries took into account that the increasing amounts of money spent in arms would lead in some time into national crisis or wars. Because of this, it was tried worldwide to act in favour of disarming in several times. However, the international rivalry was in such a point that it was not possible to achieve any effective agreement in favour of international disarming. At the same time, the European states established alliances with another powers so they were not isolated in case of a war. This attitude created something that increased the possibilities of a general conflict: the union of the great powers of Europe into two military alliances. They were the Triple Alliance, formed by Germany, Austria-Hungary and Italy; and the Triple Entente, Great Britain, France and Russia. These blocs of countries were really strong so changes that were produced into these alliances contributed to create an atmosphere of latent crisis, but not war: that is why this period of time is called the "Armed Peace". The alliance systems were supposed to promote peace. All countries were making treaties about non-aggression pacts. ...read more.

To survive as an independent power was one of the main reasons that Austria-Hungary had for entering the war. They did not want to depend of any other country, they wanted autonomy. This also they wanted to destroy Serbia, that was because they were frightened, they though that Serbia might have become a very strong power and they wanted to make sure that was not going to happen otherwise, it could make their position to shake. The immediate cause which provoked the outbreak of the First World War was the assassination of the Prince Archduke Franz Ferdinand. However there were stronger reasons than that to make a war start in that precise moment. The intense nationalist feeling that grew all over Europe was not as insignificant as it seems, it was creating conflicts which was precisely what Europe did not need anymore. The sense of competition as well was the economic and politic rivalry between the different nations was also affecting the relations between several countries. The process of militarization and the accelerated development in arms were obviously things that were affecting the whole world but also that were like a bomb gathering more and more material could not last very long, until it exploded. ?? ?? ?? ?? Alejandra Cossio Mart�nez 1 ...read more.