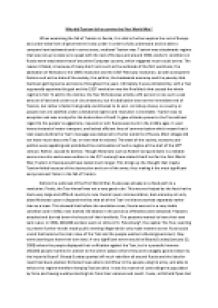 Why did Tsarism fail to survive the first world war

﻿Why did Tsarism fail to survive the First World War? When examining the fall of Tsarism in Russia, It is vital to further explore the rest of Europe and under what form of government it was under in order to fully understand and be able to compare how backwards and in some sense, medieval Tsarism was. Tsarism was a backwards regime that was not up to date so to speak with the rest of Europe and around 1900, worker?s conditions in Russia were way below that of any other European country, which triggered much social unrest. The reason it failed, is because of many short term such as the outbreak of the first world war, the abdication of Nicholas ll, the 1905 revolution and the 1917 February revolution, as well as long term factors such as the state of the society, the politics, the backwards economy and the poverty that had been getting worse and worse throughout the years. Ultimately it was a dictatorship, with a Tsar supposedly appointed by god and the 1917 revolution was the final block that caused the whole regime to fall. To add to the demise, the Tsar Nicholas was a fairly unfit person to rule such a vast amount of land and under such circumstances, but his abdication was not the immediate end of Tsarism, but rather a factor that greatly contributed to its end. As history shows, no country or people ever are satisfied under a dictatorial regime and revolution is inevitable. Tsarism was no exception and was a recipe for the destruction of itself. It gave ultimate power to the Tsar without regard to the people?s suggestions, requests or will. ...read more.

Soon they too turned on the Tsar and the string that was holding his regime together snapped. Upon the Tsars return after the revolution was already over and the power seized by the people, his train was not allowed to enter Petrograd. Visited personally on his train by Rudzienko, head of the Duma, it was made clear to him that he was no longer in power and his rule was finished, after the famous signing of a letter of resignation on the 15 March 1917. Russia?s economy was appalling due to the medieval regime and the politics which prevented its prospering. 85% of the population lived in the countryside but only 5% of the land was used for farming. Old-fashioned farming methods resulted in inefficiency and starvation. This resulted among others in the inability to provide enough food for the army which led to desertion, disease and in the end the destruction of the entire professional military that was acted as the Tsars ?strength?. As for the industry, Russia remained rich in oil. Unfortunately, due to the backwards regime, it only began to industrialize in the late 19th century and was dependent on foreign investment and was still behind the western powers. The start of the war in 1914 proved to be a slight rise for the Russian economy; output was raised by 20% and the people were looking forward to victory. When the latter expectation did not occur, rather its opposite, more peasants were gradually being sent to the front, thus not leaving anyone to work on the land and reducing production to a number close to nil. This caused a scissor crisis. ...read more.

The destruction and turn of the army may be the final cause of the fall of Tsarism, Russia was in such a strained state that ultimately, the Tsar only had the army to enforce his regime, but once the war broke out, all of the professional soldiers were killed and replaced by peasants whose policies were against the Tsar. The chain reaction that led to the destruction of the army, however, was caused by the long term factors such as poor economy which prevented good equipment and sustaining the war of attrition, the state of the society and economy led to a strain that Russia was under with the army keeping that thin string together. The largest factor being the war that brought it on its knees, it showed that the idea of Tsarism and its laws and ideology did not permit it to survive. All the classes of the Russian population unified in their hate for the tsar and dealt the final blow which was the February revolution in 1917 in Petrograd without any imperial guard to oppose them and fend them off again as they did during Bloody Sunday. This displayed truly that even the army was against the Tsar and so, he was forced to abdicate. This was the end of the Tsar. In his decree of abdication, he wished to pass on the autocratic ruins to his brother. : ?We direct our brother to conduct the affairs of state in full and inviolable union with the representatives of the people in the legislative bodies on those principles.....? His brother?s refusal of the proposition marked the true end of Tsarism forever breaking the long line of autocratic rule and instating a provisional government in Russia. ...read more.