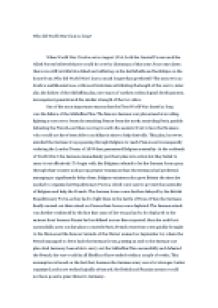 Why did World War I last so long?

﻿Why did World War I last so long? When World War I broke out in August 1914, both the Central Powers and the Allied Forces believed that it would be over by Christmas of that year. Four years later, there was still terrible bloodshed and suffering on the battlefields and hardships on the home front. Why did World War I last so much longer than predicted? The answer is no doubt a multifaceted one, with most historians attributing the length of the war to, inter alia, the failure of the Schlieffen plan, new types of warfare, technological developments, incompetent generals and the similar strength of the two sides. One of the most important reasons that the First World War lasted so long was the failure of the Schlieffen Plan. The famous German war plan aimed at avoiding fighting a war at two fronts by attacking France from the north, encircling Paris, quickly defeating the French, and then moving towards the eastern front to face the Russians who would not have been able to mobilize in time to help their ally. This plan, however, entailed the German troops passing through Belgium to reach France and consequently violating the London Treaty of 1839 that guaranteed Belgium neutrality. ...read more.

None of the forces, however, were successful and the result of this tactic was the establishment of a long line of trenches that ran all the way from the Channel coast up to the Alps. There were a few attempts made to break through the trench lines in 1914, most notably the battle of Ypres in November and the battles of Artois and Champagne in December, but again neither side was successful. Due to the creation of trenches and technological advances the defensive became a lot easier than the offensive, which of course guaranteed that there would be no swift victory by either side. The trenches were surrounded by barbed wire, the soldiers armed with machine guns and grenades, and the ground in front of the trenches was bombarded by heavy artillery, making attacks very hard to be carried out. Also the development of extensive railroads made it easy for reserves to be brought into battle at short notice. This meant that by the end of 1914 there was a military stalemate in the western front, since as previously mentioned it was very difficult to break through the trenches and even if an offensive was successful the aggressor usually only won a few kilometers. ...read more.

On the one hand the Allies collectively had more troops, since Russia possessed the biggest army in Europe and Britain and France recruited men from their colonies to fight in the war. On the other hand, Germany?s army, though not quite as large as Russia?s, was the best trained and most technologically advanced in Europe. Moreover, the British volunteer army would not be ready to enter the war until 1916. Britain did have a slight advantage over Germany in the sea because she had the largest navy in the world, whereas the latter was the second largest naval power. Both the Germans and the British, however, feared the potential consequences of great naval battles; the destruction of their navy and their starvation respectively. Consequently, naval battles weren?t common place during WWI and in fact many consider the failure of either side to gain command of the sea to be one of the reasons that the war lasted so long. The aforementioned factors are definitely not the only ones but are in my opinion the most important ones to consider when trying to understand why a war that was expected to last a few months lasted four whole years and constitutes to date, as described by Ernest Hemingway, one of the ?most colossal, murderous, mismanaged butcheries that has ever taken place on earth?. ...read more.