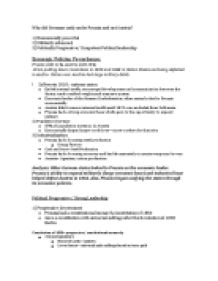 Why Germany Unified under Prussia and not Austria. Outline

﻿Why did Germany unify under Prussia and not Austria? 1) Economically powerful 2) Militarily advanced, 3) Politically Progressive/ Competent Political leadership Economic Policies: Powerhouse: Prussia debt 11%, Austria debt 26% -From putting down revolutions in 1830 and 1848 in Italian States and being defeated in Austro- Italian war, Austria had large military debts. 1. Zollverein 1818 : customs union 1. Ended internal tariffs, encouraged development and communication between the States; used a unified weights and measure system 1. Economic leader of the German Confederation; other states looked to Prussia economically 1. Austria didn?t remove internal tariffs until 1829; was excluded from Zollverein 2. Prussia had a strong economic base which gave to the opportunity to expand military 2) Population Increase 1. 87% of population increase, 2x Austria 1. Economically larger, larger work force?more workers for factories 3) Industrialization 1. Prussia had a booming steel production 1. Krupp Factory 1. Coal and Iron= Steel Production 1. Prussia had a booming economy and had the materials to create weaponry for war. 2. Austria= Agrarian, cotton production Analysis: Other German states looked to Prussia as the economic leader, Prussia?s ability to expand militarily (large economic base) ...read more.

Manipulates other leaders and out strategizes them 1. ex. Schleswig- Holstein Crisis: Bismarck successfully maneuvered Austria into allying with them to defeat Denmark as a ?German issue,? although Austria has no reason to take part (duchies are much further from Austria) 1. **** Outsmarts Rechburg of Austria 1. Bismarck pretends to support Duke of Augustenburg to avoid looking un-German and maintain Austria?s support 2. Bismarck really wants duchies for Prussia (not another German state), and he turns on both Augustenburg and Austria 1. 1865-1866: Bismarck meets with leaders of other foreign nations to secure neutrality and gain support for Prussia against a war with Austria 1. France 1865- Bismarck meets with Napoleon at Biarritz to assure French will stay neutral (hints Rhineland to Napoleon) 2. Italy-April 1865- Bismarck meets with Victor Emmanuel to make alliance against Austria 1. If there is war within the next 3 months, Italy will ally with Prussia in return for Venetia ***Diplomatically outmaneuvers Austria 1. Although Austria is political leader of German states, the leaders turn the S-H issue over to the German Diet instead of looking to the German states who supported Austria 1. ...read more.