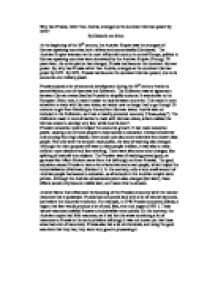 Why had Prussia, rather than Austria, emerged as the dominant German power by 1871?

Prussia had conquered land with a lot of natural resources, just before the industrial revolution. For example, in 1740 Prussia conquered Silesia, a region that later would produce a lot of coal, lead, zinc and copper (1911 ). These natural resources enabled Prussia to industrialize very quickly. On the contrary, the Austrian empire had little resources, as it had lost the areas containing a lot of resources to Prussia in the century before (although it was not known yet that these areas had a lot of resources). Prussia also had a lot of chemicals, and using the good scientists that they had, they were very good in processing it. "Austrian Empire" The infrastructure of Prussia was excellent. It had more railroads than Austria, while having less territory. By 1870, Prussia had 18876 kilometres of railroad in operation, while Austria only had 9589 (Farmer). By geographical situation Prussia also had an advantage over Austria. Austria's large cities, such as Prague, Vienna, Bratislava, and Budapest all lay in, or north of the Alps. ...read more.