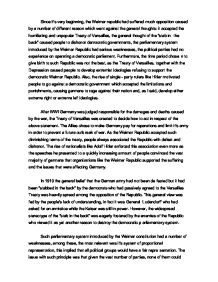 Why was the Weimar republic so short lived?

Since it's very beginning, the Weimar republic had suffered much opposition caused by a number of different reason which went against the general thoughts: it accepted the humiliating and unpopular Treaty of Versailles, the general thought of the "stab in the back" caused people to dishonor democratic governments, the parliamentary system introduced by the Weimar Republic had serious weaknesses, the political parties had no experience on operating a democratic parliament. Furthermore, the time period chosen to give birth to such Republic was not the best, as the Treaty of Versailles, together with the Depression caused people to develop extremist ideologies refusing to support the democratic Weimar Republic. Also, the rise of single- party rulers like Hitler motivated people to go against a democratic government which accepted the limitations and punishments, causing germans to rage against their nation and, as I said, develop either extreme right or extreme left ideologies. ...read more.

This general view was fed by the people's lack of understanding, in fact it was General Ludendorff who had asked for an armistice while the Kaiser was still in power. However, the widespread stereotype of the "stab in the back" was eagerly fostered by the enemies of the Republic who viewed it as yet another reason to destroy the democratic parliamentary system. Such parliamentary system introduced by the Weimar constitution had a number of weaknesses, among these, the most relevant was it's system of proportional representation, this implied that all political groups would have a fair representation. The issue with such principle was that given the vast number of parties, none of them could ever gain an overall majority. Thus causing great frustration among parties which were not able to carry out their program and which never succeeded in their campaigns. ...read more.

France took the decision of occupying the Rhur because of the German payment interruption, this depicts the French attempt of gaining goods from German factories; the German government ordered workers to follow a policy of passive resistance which prevented France to gain goods, but caused the German industries to paralyze diminishing the German economy catastrophically by creating a great inflation, resulting in the collapse of the mark. The apparently safe alternative to this catastrophe was the national socialist party- Hitler. People listened to Adolf Hitler's speeches and got convinced that he had the solution to the decaying situation. The support of the Nazi party closely depended on the economic failures- the more unstable the economy was, the more seats the Nazis won in the Reichstag. The Weimar republic was doomed from the beginning, it's unpopularity caused by it's acceptance of the Versailles Treaty and the situation Germany had to suffer under it's control pushed people to listen to extremist leaders who took radical and drastic measures expressing the opinions and feelings citizens expressed. ...read more.