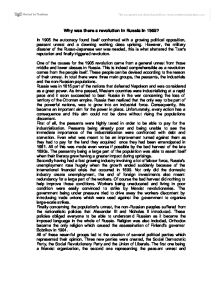 Why was there a revolution in Russia in 1905?

Why was there a revolution in Russia in 1905? In 1905 the autocracy found itself confronted with a growing political opposition, peasant unrest and a dawning working class uprising. However, the military disaster of the Russo-Japanese war was needed, this is what shattered the Tzar's reputation and finally triggered revolution. One of the causes for the 1905 revolution came from a general unrest from those middle and lower classes in Russia. This is indeed comprehensible as a revolution comes from the people itself. These people can be devised according to the reason of their unrest. In total there were three main groups, the peasants, the industrials and the non-Russian populations. Russia was in 1815 part of the nations that defeated Napoleon and was considered as a great power. As time passed, Western countries were industrializing at a rapid pace and it soon succeeded to beat Russia in the war concerning the loss of territory of the Ottoman empire. ...read more.

Secondly having had a fast growing industry involving a lot of labour force, Russia's unemployment rose hugely when the growth ended suddenly because of the international financial crisis that occurred in 1899. Not only did the domestic industry create unemployment, the end of foreign investments also meant redundancy for a large part of the workers. Of course the bad harvest did nothing to help improve those conditions. Workers being uneducated and living in poor condition were easily convinced to strike by Marxist revolutionaries. The government being under pressure tried to drive away the workers discontent by introducing trade unions which were used against the government to organize large-scale strikes. Finally concerning the population's unrest, the non-Russian peoples suffered from the nationalistic policies that Alexander III and Nicholas II introduced. These policies obliged everyone to be able to understand Russian as it became the imposed language in the whole of Russia. ...read more.

Therefore they attacked Russia's naval base in Manchuria, Port Arthur, in 1904. After a series of events Japan eventually won and forced Russia to withdraw from Manchuria. In 1905 a group led by Father Gapon marched on the Winter Palace with a petition in their hand. About a thousand people were killed by the troops, this provoked a chain reaction of strikes across Russia. By July 1905 the Union of Liberals wanted an elected parliament, meanwhile strikes continue augmenting to the point were there was a general strike, peasant rebellions and rising among the non-Russian populations. In october the monarchy was dangerously threatened to disappear because of the creation of the St Petersburg Soviet which represented the interests of the workers. As stated in the introduction the outbreak of the revolution was only made possible by disastrous defeat in the Russo-Japanese war. However, the growing revolutionary sentiment would have finally peaked in revolution, as too many parts of society were agitated by the nobility's suppression upon the people as well as the strong political opposition. ...read more.