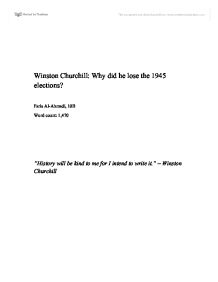 Winston Churchill: Why did he lose the 1945 elections?

Winston Churchill: Why did he lose the 1945 elections? Faris Al-Ahmadi, 10B Word count: 1,470 "History will be kind to me for I intend to write it." - Winston Churchill Table of Contents Page 2: Table of Contents Page 3: A) Plan of the Investigation Page 3: B) Description of the Evidence Page 5: C) Evaluation of the Sources Page 6: D) Analysis Page 7: E) Conclusion Page 8: F) Bibliography Page 9: Appendix A A) Plan of the Investigation This investigation will contain analysis and evidence to the following title topic; why did Winston Churchill lose the 1945 elections? 'Winston Churchill' by Peter Neville and 'Road to Victory' by Martin Gilbert will be the two main sources that will be used to evaluate different aspects in this investigation. The investigation will also carry out an evaluation of these two sources, in order to review the appropriate literature on Winston Churchill in a critical manner. The main part of the investigation will include factors and evidence leading to the end of his first reign as Prime Minister. His impact on the British population during World War II will also be evaluated, and an analysis of people's opinions will be carried out. ...read more.

Labour also ran more campaigns around Great Britain.10 C) Evaluation of the sources Winston Churchill by Peter Neville: The origin of this source is Peter Neville's book which was published in 1996. The purpose of this source is to evaluate and analyze Winston Churchill's life, and how he made it to be Prime Minister, and as the savior of Great Britain. The value of this source is emphasized greatly on Churchill's life. It stresses his accomplishments, along with his mistakes. This source can also be used for talking about World War II, because it describes many of the battles fought in World War II. However, this source has its limitations when for example, using the source for getting information about how the Germans contributed to the war, and their perspective on the whole war. Road to Victory by Martin Gilbert: As a British historian, he has written volume books about Winston Churchill, starting from Churchill's early years, to his death. The purpose of this source is to analyze the years between 1941 and 1945, focusing on Churchill's policies in Great Britain and how he approached war-like situations. This has great value if someone was to use this source as reference to World War II, because it contains a lot of technical and personal information concerning the battles. ...read more.

Churchill is seen here as a very significant war leader, but not Prime Minister. The people wanted change in Great Britain, especially after a terrible World War. E) Conclusion Winston Churchill was the savior of Great Britain, and was truly a war hero. His ability to develop strong relations with the USA contributed greatly into winning the war. Deep inside, Churchill was a fighter, and he was put as Prime Minister at the right place at the right time, which is why he was victorious in World War II. There is no challenge to say that Winston Churchill was not a war hero Prime Minister. However, his policies were not beneficial to the nations needs in peace time. People in Britain wanted change after the war, which is why they voted for change. The labor party, unlike the conservative party, offered change to the nation. They offered to put in place a National Health Service, along with other national benefits for the people. The nation needed change after witnessing such a devastating war, and Churchill was not the man to bring change. "You ask, what is our aim? I can answer in one word. It is victory. Victory at all costs - Victory in spite of all terrors - Victory, however long and hard the road may be, for without victory there is no survival. ...read more.