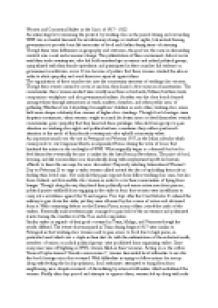 Women and Communal Strikes in the Crisis of 1917 - 1922 &amp; The Fascist Solution to the Women Question in Italy and Germany

﻿Women and Communal Strikes in the Crisis of 1917 - 1922 An interesting fact concerning the protests by working class in the period during and succeeding WWI was not initial demands for revolutionary change or worker?s rights, but instead forcing government to provide basic life necessities of food and shelter during times of rationing. Though there were differences in geography and outcomes, the goal was the same in demanding survival over social and economic change. The politicization of these movements did not occur until their male counterparts, who did hold memberships in unions and radical political groups, sympathized with their female equivalents and participated in these marches did violence or government crackdowns occur. It was because of politics that these women avoided the idea in order to elicit sympathy and avoid ferocious reprisals against them. The organization of these marches ties into the community structure of working-class women. Though these events seemed to occur at random, they shared a few common characteristics. The communities these women resided were usually near their or husbands/fathers/brothers/male companions workplaces and also government facilities. Another was the close bonds formed amongst them through interactions in work, markets, churches, and other public areas of gathering Whether it was babysitting for neighbors? children or each other, working-class omen held more deeper solidarity than women of higher class standings. Though food shortages were frequent occurrences, when women sought to march for better access to feed themselves outside communities gave sympathy that they deserved these privileges. ...read more.

A strike was called in and the women unlike the other strikes had conjured up some political conations in wearing red, the color of radical left-wing politics, in these demonstrations. Violence did break out between them and authorities and continued infrequently the rest of the year. Though the high rents were finally renegotiated with tenants unions formed. Yet they lack female membership since they argued by the author, made no attempts to secure themselves in these groups. The Fascist Solution to the Women Question in Italy and Germany Despite the similarities in the political ideologies of Italian Fascism and German Nazism, there were different approaches by each on the perception and treatment of the female population. Not only were the roles of women from different ethnic and political backgrounds marginalized, but also mixed results occurred for women who accepted and followed the totalitarian regimes. Divisions also occurred amongst feminists on regards to the political oversight both Italian Fascism and German Nazism were laid down. Though personal freedoms were strip away, some women saw these ideologies give them more economic freedoms. For the most part, both viewed women as mere contributions to the state. At first the Italian Fascists included on their 1919 platform to enfranchise the female population, but eventually reduced due to low support at first. In regards to women, members of the urban bourgeoisie were the targeted audience. They frowned upon obtaining careers, instead preferring volunteering in community activities. Fascism ironically provided a third way from the equality of feminism or traditional roles. ...read more.

Himmler introduced a breeding plan that gave preference towards single, unwed ?racially fit? women to have more children without male supervision which distraught many people. Even the violent persecutions of Jews caused feelings of disgust amongst some loyal Nazi women. To the disappointment of female followers, the regime?s attention in regards to women focused on military wives and widows and seeking employment than staying home honing traditional roles. Though it seemed for some segments of the female population felt these regimes gave prominence towards them, vast majorities of women lost civil rights they had only recently gained. In particular with Germany prior to Nazism?s rise to power; the previous government of the Weimar Republic saw a flourishing of not women?s rights, but also a break away for some women from traditional roles. The cultural vibrancy and hedonist attitudes of this era have a connection to the temporary liberation of women?s roles. Not only were the allowed to vote and hold down professional careers in certain fields, women could assume previously masculine roles in clothing and recreational activities like shorten fashions, taking up smoking, and independent living. A specific case is Sylvia von Harden, noted journalist and subject of an Otto Dix painting. It was these generalized stereotypes of ?New Women? that Nazi regime justified taking away rights of women and reintroducing traditionalistic female roles of motherhood and submissive attitudes towards men. Finally in connection with the textbook, it does mention the lives of women under Fascist Italy while for German women in the Nazi regime fails to mention their political contributions to the party and focuses only on Nazi economic policies that affected women. ...read more.