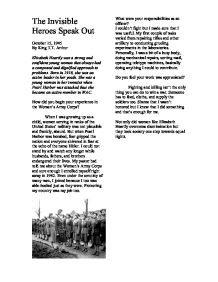 The Invisible Heroes Speak Out October 15, 1945 By King T.T. Arthur Elizabeth Heartly was a strong and confident young woman that always had a composed and dignified approach to problems. Born in 1916, she was an active leader in her youth. She was a young woman in her twenties when Pearl Harbor was attacked thus she became an active member in WAC. How did you begin your experience in the Women's Army Corps? When I was growing up as a child, women serving in ranks of the United States' military was not plausible and frankly, absurd. But when Pearl Harbor was bombed, fear gripped the nation and everyone shivered in fear at the echo of the name Hitler. I could not stand by and watch any longer while husbands, fathers, and brothers endangered their lives. My pastor had told me about the Women's Army Corps and sure enough I enrolled myself right away in 1942. ...read more.

Americans Are Not Forgiven October 15, 1945 By Lorax T.T. Suess Yori Sake Honda, a 23 year old male faced the challenges of living in an internment camp during the 1940's. He is finally speaking out on his experiments experience as a confined Japanese-American citizen after two months after his release. In the wake of Japan's attack on Pearl Harbor, I was forced to live in an internment camp along with 100,000 other Japanese-Americans. People avoided us like the bubonic plague and they questioned our loyalty. May of 1942, my sister and I were permanently moved to an assembly center under General DeWitt's order. My 7 year-old sister was too young to understand what was happening. But I fully understood the discrimination and racism. There was no way to concretely prove our loyalty to the United States but after the internment, the country proved their disloyalty to American citizens. ...read more.

This allowed the general to order the Tuskegee 332nd Fighter group to launch an attack on the unsuspecting Japanese. The 332nd Fighter group is the first all African American group to fight in the war. The successful bombing by the group caused the Japanese to retreat from their fort in Okinawa. This caused a large deciding victory for the Americans after constant battle for two months. This victory gave Americans much needed supplies at the fort and gave Americans renewed hope. This news of the victory caused the Tuskegee training center to see an increase in recruits and the Native American Code Speakers also received a higher regard. The Native Americans, such as the Navajos, used secret codes based on their native language to relay messages on the radio. This is a sure way that the enemy will not be able to decode our messages. This is a break through for other people of color and the possibilities that they could have. ...read more.