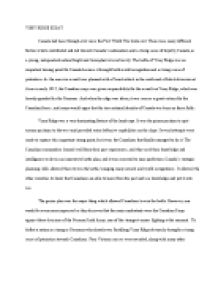 ﻿VIMY RIDGE ESSAY Canada had been through a lot since the First World War broke out. There were many different factors which contributed and led towards Canada?s nationalism and a strong sense of loyalty; Canada, as a young, independent nation fought and triumphed over adversity. The battle of Vimy Ridge was an important turning point for Canada because it brought both world recognition and a strong sense of patriotism. As the massive assault was planned with a French attack in the south and a British diversion at Arras in early 1917, the Canadian corps was given responsibility for the assault on Vimy Ridge, which was heavily guarded by the Germans. And when the ridge was taken, it was seen as a great victory for the Canadian forces; and many would argue that the true national identity of Canada was born on those fields. ...read more.

Canada?s strategic planning skills allowed them to win the battle, bringing many awards and world recognitions. It allowed the other countries to know that Canadians are able to learn from the past and use knowledge and put it into use. The genius plan was the major thing which allowed Canadians to win the battle. However, one would be even more impressed as they discover that the main combatants were the Canadian Corps against three divisions of the German Sixth Army, one of the strongest armies fighting at the moment. To defeat a nation as strong as Germany who already was fortifying Vimy Ridge obviously brought a strong sense of patriotism towards Canadians. Four Victoria crosses were awarded, along with many other rewards. ...read more.

After they saw the Canadians win in France, the French in North America knew not to try it on, and they settled down peacefully to be Quebec. It also brought Canada?s independence from Britain. As one can also see here, this battle was very significant in bringing pride towards the Canadians, and it brought world recognition. The victory of the battle of Vimy Ridge, although it was very bloody, was a significant accomplishment among the Canadians, as it brought world recognition and a strong sense of patriotism. The Canadians developed a genius plan which was nearly perfect and mesmerized all the other nations. Young Canada defeated a country as powerful as Germany, which is another factor that brought pride among Canadians. Lastly, although they payed a large price for the victory for this battle, Canadians believed they can now win over anything and became proud as they became a young, strong independent nation. ...read more.