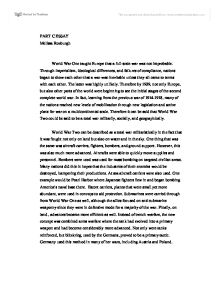 WW2 as a total war

PART C ESSAY Melissa Roxburgh World War One taught Europe that a full-scale war was not improbable. Through imperialism, ideological differences, and failures of compliance, nations began to show each other that a war was inevitable unless they all came to terms with each other. The latter was highly unlikely. Therefore by 1939, not only Europe, but also other parts of the world were beginning to see the initial stages of the second complete world war. In fact, learning from the previous war of 1914-1918, many of the nations reached new levels of mobilization through new legislation and active plans for war on a multicontinental scale. Therefore it can be said that World War Two could be said to be a total war militarily, socially, and geographically. World War Two can be described as a total war militaristically in the fact that it was fought not only on land but also on water and in the sky. One thing that was the same was aircraft carriers, fighters, bombers, and ground support. ...read more.

The new weapon for World War Two was used first by the United States and was called a semi-automatic rifle. Ciphering can also be considered land warfare. This was a progression in itself, and encompassed a non-physical aspect of war. The Allies mastered this more effectively than her enemies. Social total war can be described as the degree in which the civilians of a nation participated as well as the economic support towards the war. Before the war broke out, the Allies were ahead in population and economics by 30%. This gave them a 5:1 advantage over the Axis powers. In Asia China was also ahead of her enemy, Japan, who was also an Axis power. However, the Axis powers fought this advantage with their blitzkrieg strategies. Through bombing however, the Allies were able to out-produce her enemies. Germany's disadvantage was that it lacked natural resources. This participated as an aspect of total war in the fact that Hitler had to expand across new territories for these resources. Employment was a factor as well. ...read more.

Conscription was introduced, as well as rationing of goods and services. This was true for the USSR as well, who used millions of soldiers to fight in the war. Russia encouraged its civilians to work harder through nationalistic propaganda. Although America chose to be isolationist at first, they eventually gave aid. Children of America even took part by collecting fat, grease, and scrap metal. The industry of this nation produced non-essential goods and products for war production, as well as supplied Britain with artillery. The advancement of era carried on after the war. The end of the war advanced many discoveries and medicine, physics, engineering, and other sciences benefited. The war was spread out over many countries. New weapons had appeared. Nuclear weaponry had been created, which would serve later purposes in history. The geographical lines of Europe changed, and the center of power was now the United States. Millions of civilians had been relocated from their previous living territories as well. For example, all of the labor camp slaves. A lot of decolonization occurred with the British colonies. This all leads to the conclusion that World War Two was a full-scale war, or a total war. ...read more.