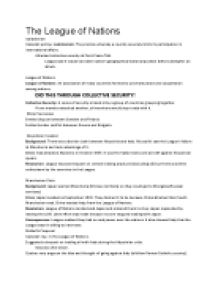 WW2 notes on the causes and the involvement of Canada.

﻿The League of Nations Isolationism Canada's policy= isolationism: The practice whereby a country severely limits its participation in international affairs. Attacked collective security at Paris Peace Talk League said it would consider nation's geographical national position before asking for an attack. League of Nations League of Nations: An association of many countries formed to promote peace and cooperation among nations. DID THIS THROUGH COLLECTIVE SECURITY! Collective Security: A sense of security arrived at by a group of countries grouping together. If one member attacked another, all members would stop trade with it. Minor Successes Settled dispute between Sweden and Finland Settled border conflict between Greece and Bulgaria Abyssinian Invasion Background: There was a border clash between Abyssinia and Italy. Mussolini saw the League's failure at Manchuria and took advantage of it. Crisis: Italy attacked Abyssinia in October 1935. It was the Italian tanks and aircraft against Abyssinian spears. Resolution: League imposed boycott on certain trading products (excluding oil) but there was little enthusiasm by the countries in the League. Manchurian Crisis Background: Japan wanted Manchuria (Chinese territory) so they could get to Mongolia (Russian territory) ...read more.

Kristallnacht: The Night of Broken Glass. Hitler Youth, Nazi storm troops and members of the SS beat, brutalized and murdered Jews throughout the German Reich. Synagogues were vandalized and burnt down. Houses and Jewish shops were torn down. War In Europe New Kind of War MORE TECHNOLOGICAL DEVELOPMENTS Low range bombers Faster tanks Motorized forces NEW WEAPONS Bazookas Better machine gun BETTER COMMUNICATION SYSTEMS Rader warning systems: Helped win the Battle of Britain against German air force. Cryptologists: Codes for commanders to troops. HANDOUT- Lightning War to Phoney War to Battle of Britain Bliztiberg= It focused on speed, surprise and weight of attack. Airplanes attacked inside the enemies defences, while tanks broke through the defences. NAZI-SOVIET ACT= Russia gave Germany grain and raw materials (copper, nickel, tin, iron ore). They also removed the threat of a war from the West. Germany gave Russia a technical knowhow for armaments industry. They also gave Russia part of Poland and all of Ethiopia, Lithonia, etc. PHONEY WAR= For a long period of time, the opposing sides simply prepared and prepared. There were no attacks and no action was taken. ...read more.

Refugees: Persons who flee for refuge or safety, especially o a foreign country, in time of persecution, war, etc. Cairine Wilson: First female senator in Canada. Headed the Canadian National Committee Council on Refugees and opposed anti-Semitism. Blacks, Aboriginals, Japanese in Canada Japanese Little evidence to suggest Japanese would attack, but citizens still continued to think this way. Worst on West coast, where Anti-Asian was a long historical problem. At first, 38 Japanese were arrested as spies with little proof. February 1942: Any Japanese living 62 km of the BC coast would move inland. Many Japanese were interned at abandoned mining towns. Others worked as farm labourers in the Prairies and Ontario. After war, couldn't go to the west of the Rockies and couldn't vote until 1949. Blacks Until 1942, the government ignored employer's restrictions on hiring Blacks. Practiced ended after protests from university kids and campaign by the press. War caused many black civil rights groups to start. By the end, there were groups in all the major cities across Canada. Natives were the same way. They also believed if they fought for the country, they deserved to be treated like everybody else. War brought more feelings of civil rights. Radical Discrimination Act: Prohibited the publication or broadcast or anything that discriminated on the basis of race or creed. ...read more.