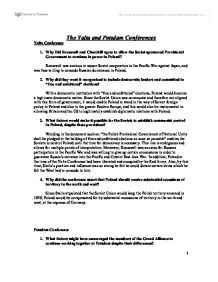 The Yalta and Potsdam Conferences Yalta Conference 1. Why Did Roosevelt and Churchill agree to allow the Soviet-sponsored Provisional Government to continue in power in Poland? Roosevelt was anxious to secure Soviet cooperation in the Pacific War against Japan, and was thus willing to concede Russian dominance in Poland. 2. Why did they want it reorganized to include democratic leaders and committed to "free and unfettered" elections? With a democratic institution with "free and unfettered" elections, Poland would become a legitimate democratic nation. Since the Soviet Union was communist and therefore not aligned with this form of government, it would enable Poland to stand in the way of Soviet foreign policy in Poland and also in the greater Eastern Europe, and this would also be instrumental in allowing Britain and the US to legitimately establish diplomatic relations with Poland. 3. What factors would make it possible for the Soviets to establish communist control in Poland, despite these provisions? Wording in the document such as: "the Polish Provisional Government of National Unity shall be pledged to the holding of free and unfettered elections as soon as possible" enables the Soviets to control Poland until the time for democracy is necessary. ...read more.

Despite differences, the Allied leaders worked together to settle territorial disputes, issues of ethnic transfers, reparations and payments due from Germany, and other such issues. Neither side would have liked the other to determine the outcome of post-war Europe, and so worked closely together to guarantee a compromise agreement that everyone could work towards. 2. Who was assigned supreme authority in occupied Germany? Why was this done? The Commanders-in-Chief of the armed forces of the United States, United Kingdom, USSR, and the French Republic. 3. Why were the Soviets so interested in receiving industrial reparations from defeated Germany? The Soviets wanted to ensure that Germany could never be able to muster the strength to ever oppose the USSR in any way. Germany's impressive economy was what allowed Germany to fight such a calamitous war. Reparations was a way of ensuring that Germany's industry and war-capacity would be kept minimal, if not completely annulled, and therefore would secure the USSR's western borders. 4. Why did the Americans insist that the USSR could take reparations only from the Soviet-occupied zone, and not from the rest of Germany? ...read more.

It was also a way of making sure there would be no future border disputes. 7. In what ways did the Potsdam agreements set the stage for the future division of Europe into Eastern and Western Blocs? The agreements reached at Potsdam would eventually divide Europe into what Churchill later infamously labeled: "The Iron Curtain." First of all, the different zones which Germany was divided into for the purpose of extracting reparations would later come to divide the nation into East and West Germany. Moreover, Stalin never kept his promise to provide "free and unfettered" elections in Poland and in instituting a democratic government in Poland as had been agreed upon at the Yalta Conference several months earlier. Most of Eastern Europe gradually came to be dominated by Soviet-controlled pro-communist puppet governments as the Soviet Union was granted an influential sphere of dominance in Eastern Europe after the Potsdam Conference. The Allied Powers recognized the new pro-communist Polish regime, effectively rendering the previous Polish government-in-exile in London obsolete. In doing so, it solidified the USSR's claim in Eastern Europe. ?? ?? ?? ?? 1 ...read more.