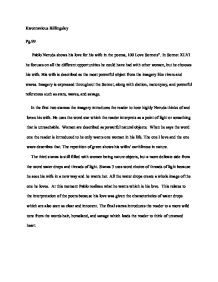 Kwontavious Billingsley Pg.99 Pablo Neruda shows his love for his wife in the poems, 100 Love Sonnets". In Sonnet XLVI he focuses on all the different opportunities he could have had with other women, but he chooses his wife. His wife is described as the most powerful object from the imagery like rivers and waves. Imagery is expressed throughout the Sonnet, along with diction, metonymy, and powerful references such as stars, waves, and savage. In the first two stanzas the imagery introduces the reader to how highly Neruda thinks of and loves his wife. He uses the word star which the reader interprets as a point of light or something that is unreachable. ...read more.

All the water drops create a whole image of the one he loves. At this moment Pablo realizes what he wants which is his love. This relates to the interpretation of the poem because his love was given the characteristics of water drops which are also seen as clear and innocent. The final stanza introduces the reader to a more wild tone from the words hair, homeland, and savage which leads the reader to think of untamed heart. In stanza 4 the author says, "from all the graces of my homeland offered" He is from Chile so his choices are only Chilean women. The line I chose only your savage heart relates back to my interpretation that he still picks his love over all of his other possibilities to have. ...read more.

Pablo repeats the word green in stanza two. Green is youthful and vigorous telling the reader that Pablo could have had a young and strong woman. The author keeps repeating the word all in each stanza to indicate the whole amount. In the first 3 stanzas the word all relates to the total amount of women out there available to Pablo. In stanza four all is used to describe how much Pablo wants his love. He wants her all to himself. This leads the reader to think that Pablo is truly in love with his wife and no force of nature can come between the powers of love. This relates back to the interpretation which tells the author only wants his love and his love is a powerful force of nature. The reader finally understands that no force or women can change Pablo from wanting his love. Word Count: 557 ...read more.