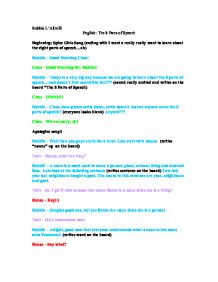 Robbie L'Altrelli English: The 8 Parts of Speech Beginning: Spice Girls Song (ending with I want a really really want to learn about the eight parts of speech...ah) Robbie - Good Morning Class! Class - Good Morning Mr. Robbie! Robbie - Today is a very big day because we are going to learn about the 8 parts of speech...now doesn't that sound like fun??? (sound really excited and writes on the board "The 8 Parts of Speech) Class - Ohhhh!!! Robbie - Class, class please settle down, settle down!! So can anyone name the 8 parts of speech? (everyone looks blank) Anyone??? Class - We are sorry, sir! Apologize song!! Robbie - Well then you guys are in for a treat. Lets start with nouns! (writes "nouns" up on the board) Toni - Nouns, what are they? Robbie - A noun is a word used to name a person, place, animal, thing and abstract idea. ...read more.

They say that eating beef is bad for you. They is the pronoun referring to someone this represents cows. Renee - What beef is bad for you...but I like beef!! Robbie - Calm down... It is just an example. O I forgot to mention that pronouns can also replace nouns using words such as all, both, he, she, his, hers, us, they, them, it and many more. But that is enough of that...what about adjectives. Toni - Adjectives? Robbie - ok Adjectives tell more about a certain noun, describing it. I have an idea lets use adjectives to describe Renee. Toni - Ok well she smells and has big feet. Renee - Hey!!! Robbie - Ok not exactly what I was looking for, but you are correct. Alright now onto verbs. Verbs tell about an action or a state of being. There are three types of verbs Action, Linking and Auxiliary. ...read more.

Many prepositions show direction. In the sentence the cat walked across the couch. Across is the prepostion. Robbie - wow...did not see that coming...good job that is correct Renee - (brushes shoulders) I know whatever you like. (Whatever you like song.) Robbie - Ok conjunctions are next. Conjunctions connect words or groups of words. Some examples of this are words such as; and, but and or. Toni - I hate this class and I find it boring. Robbie - wow good one. And is the conjunction. Hey!! Class - laughs Robbie - ok ok...last one guys!! Interjections. Renee - it is a sudden rush of feeling! (feels like some kind of rush plays) Robbie - yes it is! An interjection expresses an emotion. It might show excitement or surprise. For example OMG or Shoot! Toni - I don't want to do this anymore! (song plays) Robbie - That is ok because we are done. Now wasn't that fun?? (no one left in the classroom) Robbie - Guys? Guys?? ...read more.