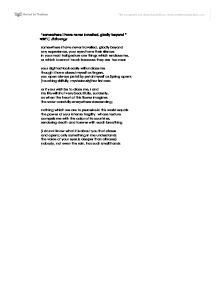 somewhere i have never travelled, gladly beyond poem commentary

"somewhere i have never travelled, gladly beyond" E.E. Cummings somewhere i have never travelled, gladly beyond any experience, your eyes have their silence: in your most frail gesture are things which enclose me, or which i cannot touch because they are too near your slightest look easily will unclose me though i have closed myself as fingers, you open always petal by petal myself as Spring opens (touching skilfully, mysteriously)her first rose or if your wish be to close me, i and my life will shut very beautifully, suddenly, as when the heart of this flower imagines the snow carefully everywhere descending; nothing which we are to perceive in this world equals the power of your intense fragility: whose texture compels me with the color of its countries, rendering death and forever with each breathing (i do not know what it is about you that closes and opens; only something in me understands the voice of your eyes is deeper than all roses) ...read more.

In the second stanza, the narrator describes his love for the woman, as it is able to "unclose" the narrator easily, even though he has closed himself "as fingers". He suggests that he has perhaps had a bad experience with love or with another woman in the past, and that being the reason of him closing himself. Now though, he is embracing these new emotions, describing his emotions to that of a rose opening up in spring (the rose is a symbol of love). The narrator personifies spring as a person opening up the rose, possibly describing the woman as this beautiful season. As spring is the season where the flowers start blooming, he might be hinting that she is the new beginning for him, after a time of coldness; winter. In the third stanza, the speaker is describing his undying love towards the woman, that if it were her wish to close him, he would do so, but "beautifully". ...read more.

Her beauty though, can "[render] death and forever with each breathing" which links to the last stanza, with the description of death, and her power of it. In the fifth and last stanza, the narrator is describing how unsure he is about the woman's powers over him. He does not know "what it is about you that closes / and opens.", but he understands that the voice in her "eyes is deeper than all roses", which is a description of her soul, and how it is more significant than himself, in his own eyes. He then describes her as having all powerful, through the line "nobody, not even the rain, has such small hands". This suggests that nothing could have opened him before (he described himself as a rose), not even the rain, which came after the winter's snow. Then comes this woman, who manages to open him up to the world and her. The concluding line of this poem declares his undying love for this special woman, who has managed such an impossible feat. ...read more.