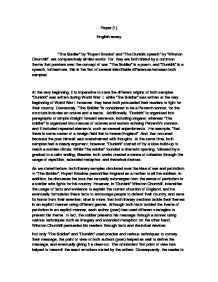 The Soldier by Rupert Brooke and The Dunkirk speech by Winston Churchill, are comparatively similar works. For, they are both linked by a common theme that ponders over the concept of war

Paper (1) English essay "The Soldier" by "Rupert Brooke" and "The Dunkirk speech" by "Winston Churchill", are comparatively similar works. For, they are both linked by a common theme that ponders over the concept of war. "The Soldier" is a poem, and "Dunkirk" is a speech, furthermore, this is the first of several identifiable differences between both samples. At the very beginning, it is imperative to state the different origins of both samples. "Dunkirk" was written during World War II, while "The Soldier" was written at the very beginning of World War I. however, they have both persuaded their readers to fight for their country. Conversely, "The Soldier "is considered to be a Petrarch sonnet, for the structure includes an octave and a sestet. Additionally, "Dunkirk" is organized into paragraphs of simple straight forward sentence, including slogans; whereas "The soldier" is organized into stanzas of octaves and sestets echoing Petrarch's sonnets, and it included repeated elements, such as several enjambments. For example, "that there is some corner of a foreign field that is forever England". ...read more.

Consequently, the reader is not only able to notice the message, but also to live it and understand it. For instance, the point of view was apparent in both example through the usage of the words such as, I, me, and myself. Moreover, both writers employed the concept of mood, tone, atmosphere, and attitude to express the significance of their message. In "The Soldier" the tone was hopeful, optimistic, pride, and joyful; as it was evident through the usage of words such as flowers, love, evil shed away, rivers, suns of home...etc. Usually, the tone is responsible for creating the mood, and this is apparent in both works. For, the mood is sturdily connected to the atmosphere in both the speech and the poem. In "The Soldier", the mood is uplifting and encouraging. The poet generates a sense of loyalty and love towards the country, and indirectly persuades the reader to defend his country by glorifying the act of death, and devotion to one's own country. ...read more.

Though, in "Dunkirk" persuasion was done through the usage of rhetorical devices. However there was little imagery added to the speech like "ride out the storm" and "grip of Gestapo". He used repetition such as anaphora "we shall fight on the seas and oceans we shall fight with growing confidence and growing strength in the air, we shall fight on the beaches, we shall fight on the landing grounds, and we shall fight in the fields and in the streets." As for the sets of 3, which is also considered another form of rhetorical device, is apparent in "Dunkirk" as well. Such as, "if all do their duty, if nothing is neglected, ad if the best arrangements are made". And, there was a reference to a figure of authority, as well as, an extensive use of facts. In the end, it is appropriate to restate the fact that both texts may have been bound together by a common theme which is war and patriotism, but can be very different due to the effective use of elements such as imagery, language, imagery, diction, and poetic forms and terms. (Paper 1 ) English essay Done by: layal lutfi Teacher : Dina Said Class :11 IB ...read more.