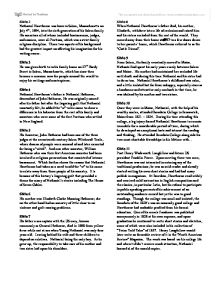 A Biography of Nathaniel Hawthorne. Life and Family

Slide 2 Nathaniel Hawthorne was born in Salem, Massachusetts on July 4th, 1804, into the sixth generation of his Salem family. His ancestors all of whom included businessmen, judges, and seamen, were all Puritans, which was a strict family religious discipline. These two aspects of his background had the greatest impact on affecting his imagination for his writing career. Slide 3 He was given birth to in his family home on 27th Hardy Street in Salem, Massachusetts, which has since then become a museum now for people around the world to enjoy his writings and masterpieces. Slide 4 Nathaniel Hawthorne's father is Nathaniel Hathorne, descendant of John Hathorne, He was originally named after his father but after the lingering guilt that Nathaniel constantly felt, he added the "w" to his name to show a difference in his behavior from the rest of his family and ancestors who were some of the first Puritans who settled in New England. Slide 5 His Ancestor, John Hathorne had been one of the three judges at the seventeenth-century Salem Witchcraft Trails, where dozens of people were accused of and later executed for being a "witch". And one other ancestor, William Hathorne who was their first American ancestor had been involved in religious persecutions that consisted of intense harassment. ...read more.

Slide 14 Still with his completed work, his insufficient earnings as a writer force Nathaniel Hawthorne to enter into a career as a Salem Custom House Measurer in 1839. 3 Years later, in 1842, Hawthorne left this job and with the money from the job and the money he had accumulated from his writings, he had a sufficient income to marry painter and an active participant in the Transcendentalist movement... Slide 15 Sophia Peabody in Boston on July 9th, 1842. It was Sophia who had brought Nathaniel out of his "haunted chamber" which Nathaniel had started to lock himself in. During they're wedding though, only the bride's family attended the wedding to celebrate their marriage. With whom he had three children with, Una Hawthorne, Rose Hawthorne, and future author Julian Hawthorne. Slide 16 The newly married couple resorted not to the Brook Farm, but settled in the heart and center of the Transcendentalist country movement, in Concord, Massachusetts at the house, which came to be known as "The Old Manse". Here, they spent several years in happiness in as much quiet living as they could achieve. Slide 17 Concord was the home of Ralph Waldo Emerson, Henry David Thoreau and Ellery Channing. ...read more.

Slide 31 Nathaniel Hawthorn was then buried in "Sleepy Hollow Cemetery" in Concord Massachusetts. After his death, his wife, Sophia Hawthorne edited and published his notebooks. Many of these works include many sections, which she had cut out or altered. In addition, a number of his unfinished works were also published posthumously. Other / After Nathaniel's writing styles had altered and shape through his many years of writing, the most significant change being the time frame when he had returned home to his mother's household from attending Bowdoin College. He was one of the first American writer to explore the hidden motivations of his characters. Among his allegory stories, he explains the motives of people's lives and their actions. His works has remained to this day notable for their treatment of guilt and the complexities of moral choices. Nathaniel wrote his stories based on the themes of psychology, his own view on nature, his own views on religion and his religious beliefs and allegory. The symbols that he most often used are adultery, sins and human morality. Nathaniel had spent his writing times exploring the possibilities of writing with the concept of neutral territory, an absence of character confrontation, the use of formal dialog and to supply readers with a lengthy visual description. ...read more.