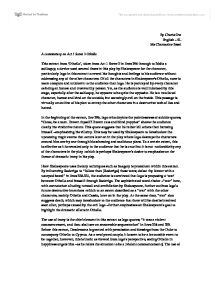 A commentary on Act 1 Scene 3 Othello

By Charis Ow English - SL Ms Charmaine Basel A commentary on Act 1 Scene 3 Othello This extract from 'Othello', taken from Act 1 Scene 3 in lines 296 through to 364 is a soliloquy; a device used several times in this play by Shakespeare for the character, particularly Iago in this extract to reveal his thoughts and feelings to his audience without addressing any of the other characters. Of all the characters in Shakespeare's Othello, none is more complex and unknown to the audience than Iago. He is portrayed by every character as being an honest and trustworthy person. Yet, as the audience is well informed by this stage, especially after the soliloquy, he appears to be quite the opposite. He is a two faced character, honest and kind on the outside, but seemingly evil on the inside. This passage is virtually an outline of his plan to entrap the other characters in a destructive web of lies and hatred. In the beginning of the extract, line 296, Iago who depicts the pointlessness of suicide quotes; "Come, be a man. Drown thyself? ...read more.

At the same time, "war" also suggests death, which may foreshadow to the audience that there will be deaths involved soon after, perhaps caused by the evil Iago -further emphasizes on Shakespeare's goal to highlight the dramatic effects in Othello. The use of irony is the chief element in this extract as Iago quotes; "it was a violent commencement, and thou shalt see an answerable sequestration" in lines 334 and 335. Before this extract, Desdemona is granted with permission and blessings from the Duke to accompany Othello to Cyprus. As a newlywed couple, it is seen to be a favourable event to be together, however, this is ironic as viewed from Iago's perspective, seeing Othello in happiness angers him -as he refers the situation to be a [violent commencement]. The use of irony here is effective as it further emphasizes how he is seen to be kind and honest to the characters throughout the play but in truth, he is a wicked person. In fact, the whole extract shows Shakespeare's employment of dramatic irony as Iago is revealing all his evil thoughts and future plans ...read more.

even if it means mortgaging or selling all of his assets to destroy Othello -emphasizing Iago to be an ill-minded and cunning materialist. This line is employed by Shakespeare is also to perhaps convey a message to his audience that how twisted-minded a person can be to obtain the desires of his/her heart in the society. At the same time, this situation of Roderigo handing his money to Iago eludes the picture of 'bargaining with the devil' -when in the end, he/she will self-destruct with tragic consequences, perhaps foreshadows Roderigo's tragic death later on in the play as he is killed by Iago, the 'devil' himself. In conclusion, the combined use of literary techniques above clearly allows the extract to depict the true colours of Iago which is filled with malice in his soliloquy. At the same time, shaping the play through the use of dramatic irony allows Shakespeare to epitomize the complexity of humanity and the intricacy of society. Meanwhile it allows him to incorportate true-to-life societal issues where people are pretentious such as Iago and many are blinded by them such as Roderigo. ...read more.