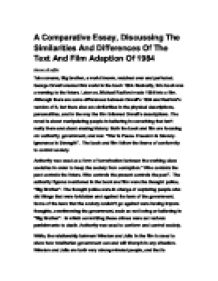 A Comparative Essay, Discussing The Similarities And Differences Of The Text And Film Adaption Of 1984

A Comparative Essay, Discussing The Similarities And Differences Of The Text And Film Adaption Of 1984 Hassan Al-saffar Tale screens, Big brother, a world known, watched over and perfected. George Orwell created this world in the book 1984. Basically, this book was a warning to the future. Later on, Michael Radford made 1984 into a film. Although there are some differences between Orwell's 1984 and Radford's version of it, but there also are similarities in the physical descriptions, personalities, and in the way the film followed Orwell's descriptions. The novel is about manipulating people in believing in something that isn't really there and about erasing history. Both the book and film are focusing on: authority, government, and war. "War is Peace. Freedom is Slavery. Ignorance is Strength". The book and film follow the theme of conformity to control society. Authority was used as a form of terrorization between the working class societies in order to keep the society from corruption." Who controls the past controls the future. Who controls the present controls the past". The authority figures mentioned in the book and film were the thought police, "Big Brother". The thought police were in charge of capturing people who did things that were forbidden and against the laws of the government. ...read more.

The Junior Anti-Sex League is one of the propaganda organizations used to control desire and teach sexual orthodoxy, in which was mentioned in the film. The Party's sexual puritanism is due to the fact that "the sex instinct creates a world of its own" and is therefore out of the Party's control and must be tortured, abolished and destroyed; "The sex instinct will be eradicated. Procreation will be an annual formality like the renewal of a ration card. "We shall abolish the orgasm". The sex instinct is dangerous to the Party and makes a "direct, intimate connection between chastity and political orthodoxy". Sex is an act of outright uprising, as all enjoyable sex must be in a society where the act is supposed to be free of pleasure. In this sense Winston's affair with Julia is a political act against the Party, which is part of the attraction. Perhaps the greatest crime they commit is declaring love for someone as an individual, someone who is separate from the Party. Therefore, even though Winston and Julia say "I love you" to each other, their sexual relationship is pretty much affected be the political act that surrounds the wholly piece of drama as a novel and a film, therefore it is not an act of love. ...read more.

I especially enjoyed how Room 101 was done in the film, as it manages to take a fear that not everyone shares (rats) and makes the viewer sense the same terror which Winston suffers. On the other hand, I believe that the film version did not present Orwell's original intent through some variations in events from the book. While Winston is clearly presented as truly loving Big Brother at the conclusion of the novel," He who controls the past controls the future", "If people cannot write well, they cannot think well, and if they cannot think well, others will do their thinking for them", and with many other quotes. It is unclear whether Winston is claiming his love for Julia or Big Brother during the film. The fact that Winston wrote only "2 + 2 =," not "2 + 2 = 5," leaving the result as whatever the government and "Big Brother" wants it to be. In this regard, Orwell's true meaning is lost or translated into the way Radford presents his interpretation of the novel. Orwell's intent was to show audiences that the Party makes sure nobody dies a martyr within Oceania, but through the film version's refusal to embrace idea is disappointing in that it does not portray Winston as truly loving Big Brother. ...read more.