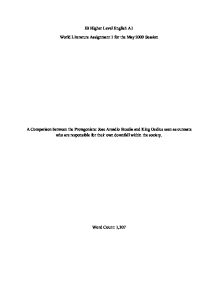 A Comparison between the Protagonists: Jose Arcadio Buedia and King Oedius seen as outcasts who are responsible for their own downfall within the society.

IB Higher Level English A1 World Literature Assignment 1 for the May 2009 Session A Comparison between the Protagonists: Jose Arcadio Buedia and King Oedius seen as outcasts who are responsible for their own downfall within the society. Word Count: 1,307 Gabriel Garcia Marquez, the author of One Hundred Years of Solitude based the development of his characters, specifically the protagonist Jose Arcadio Buendia upon the intriguing culture of Latin America. In Sophocles play, Oedipus the King, he focuses on a man called Oedipus who is in an attempt to discover his true past. Jose Arcadio Buendia and King Oedipus: two very intense and daring leaders with great insights in the beginning, turn out to be weak and disillusioned by their own acts leading to them being rejected by both family and society. In One Hundred Years of Solitude, the pathway leading to Jose Arcadio Buendia to being an outcast is slow and unexpected because the book starts off strong with him setting off into the wilderness and being the founder of a village called Macondo. Furthermore, he leads his family into modernity. However, Gabriel Garcia Marquez throws in clues foreshadowing on what would lead to his downfall- insanity through knowledge. "If you have to go crazy, please go crazy all by yourself!" ...read more.

"Ten men were needed to get him down, fourteen to tie him up, twenty to drag him to the chestnut tree in the courtyard, where they left him tied up, barking in the strange language." (Marquez 81). Jose Arcadio Buendia became a complete stranger when he was rejected by his family and tied to the chestnut tree. The chestnut tree is thus seen as a symbolism for loneliness and solitude that Buendia takes over. It was at this point of time that he lost almost all connection with his family. He had started to talk in Latin, making him incapable to communicate with other people. Furthermore, the fact that Jose Arcadio Buendia never learned Latin and became flawless at it only emphasizes his madness. Marquez is revealing Jose Arcadio Buendias mental state as a result of having an imagination too far ahead of what he is capable, thus being unable to obtain a purposeful outcome from his quest of knowledge. He was unable to handle the constant failures and when he thought that he discovered perpetual motion, his sanity was questioned. He was an alien to the existence of his sons and the quest of knowledge overcame his duties towards his family making him an abandoned and lonely person. ...read more.

Jose Arcadio Buendia and King Oedipus: two very intense and daring leaders with great insights in the beginning turn out to be weak and disillusioned by their own acts leading to them being rejected by both family and society. Similar character traits can be seen in Jose Arcadio Buendia and King Oedipus and both the protagonists had to face humiliation as a result of them being over ambitious. They came from being respected members of the society to being rejected. Although this decline from a dedicated genius to being an outcast might seem like a tragedy, the ventures pursued by the protagonists can be considered as a process of self-discovery. Through analyzing the psychological development of Jose Arcadio Buendia, the reader can have insights on the complex motives, which Marquez provides. These motives can help the reader understand Marquez's magical realisms or even the development towards the plot. Oedipus's character is filled with pride preventing him to see the truth, and he refuses to believe that he could have been responsible for such a horrible crime. Both One Hundred Years of Solitude and Oedipus the King start off very strong and favor the protagonists acknowledging their great achievements, but towards the end talk about their doom and worthlessness in the society. The disillusionment takes place unexpectedly, but the quest for knowledge is the key factor leading to their downfall. ...read more.