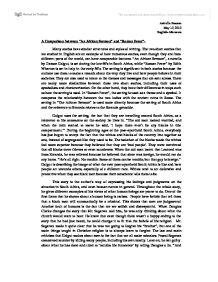 A Comparison between An African Sermon and Roman Fever-

A Comparison between "An African Sermon" and "Roman Fever"- Many stories have similar structures and styles of writing. The two short stories that we studied in English are an example of how numerous stories, even though they are from different parts of the world, can have comparable features. "An African Sermon", a novella by Damon Galgut, is set during the late 90's in South Africa, while "Roman Fever" by Edith Wharton is set in Italy in the early 50's. The setting is significant in both stories because the authors use them to make a remark about the way they live and how people behave in their societies. They are also used to relate to the themes and messages that are sent across. There are many more similarities between these two short stories, including their uses of symbolism and characterization. On the other hand, they have their differences in ways such as how the setting is used. In "Roman Fever", the setting is used as a theme and a symbol. It compares the relationship between the two ladies with the ancient ruins in Rome. The setting in "The African Sermon" is used more directly because the setting of South Africa and the reference to Rwanda relates to the Rwanda genocide. Galgut uses the setting, the fact that they are travelling around South Africa, as a reference to his comments on the society he lives in. ...read more.

At the end, Galgut describes how Douglas has changed and he is no longer full of confidence and certainties as he was in the beginning. "He could see the hard little steeple with it surmounting cross against the sky but they brought him no comfort today. They looked like curious symbols, signs from an old, lost language, separate to him and far away." This shows that he has lost faith in everything he believed in and he became confused. It is irony in the story because he was once convinced and certain that everything was "bright stories with a clear moral theme," but now, he saw things differently. He started to question everything he believed in. It seems as if he is always missing something. When he first came, he searched for the connection he wanted to have with Africa, and was faithful to his beliefs, but as he becomes more experienced and familiar with Africa, he starts to lose faith in what he believed in. The irony relates to where the story is set. "Roman Fever" starts off with two American women sitting in the terrace of a Roman restaurant. "From the table at which they had been lunching two American ladies of ripe but well-cared-for middle age moved across the lofty terrace of the Roman restaurant and, leaning on its parapet, looked first at each other, and then down on the outspread glories of the Palantine and the Forum..." ...read more.

In "An African Sermon", Leonard Sagatwa did not seem like he was the murderer who killed many people, but at the end, it is revealed that he is actually Pascal Sagatwa, the murderer. Mrs. Ansley may look like an innocent and quiet woman who would never betray her best friend's fianc�, but she had an affair with him and had his daughter. There were all key points to what made the endings of the story so shocking. The main difference between the two short stories is the way that the setting is used. In "Roman Fever", the setting is used as a theme and a symbol while in "An African Sermon", the setting is used more literally by relating to an incident in Rwandan history. Another difference is the relationship between the characters in the story. In "Roman Fever", the two ladies "knew" one another since their childhood. They are very familiar with each other and have a "friendly" relationship. The relationship between Leonard and Douglas is the opposite because they do not know each other very well. They only met once on a train and they have not met again since then. They have an awkward relationship as if they were complete strangers. In conclusion, both stories use the setting as a literary device to emphasize their themes and to send out their message. Its significance to the story helps the authors criticize and comment about the society. ?? ?? ?? ?? Astrella Rosano May 17, 2010 English- Marzena ...read more.