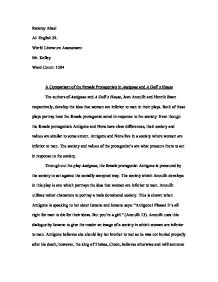 Rammy Abssi A1 English SL World Literature Assessment Mr. Kelley Word Count: 1204 A Comparison of the Female Protagonists in Antigone and A Doll's House The authors of Antigone and A Doll's House, Jean Anouilh and Henrik Ibsen respectively, develop the idea that women are inferior to men in their plays. Both of these plays portray how the female protagonist acted in response to the society. Even though the female protagonists Antigone and Nora have clear differences, their society and values are similar to some extent. Antigone and Nora live in a society where women are inferior to men. The society and values of the protagonist's are what pressure them to act in response to the society. Through out the play Antigone, the female protagonist Antigone is pressured by the society to act against the socially accepted way. The society which Anouilh develops in this play is one which portrays the idea that women are inferior to men. Anouilh utilizes minor characters to portray a male dominated society. This is shown when Antigone is speaking to her sister Ismene and Ismene says: "Antigone! Please! It's all right for men to die for their ideas. But you're a girl." (Anouilh 13). ...read more.

When did my little squirrel get home?" (Ibsen 2). Ibsen uses this animal imagery to immediately develop the idea that women are like pets to men in this society. Animal imagery continues to be used through out the play to further develop the idea that in this society women are inferior to men and this ultimately pressures Nora to act against the society. Her husband is always worried about how he is portrayed in this society and when Nora begins to realize that the pressure builds up. She becomes fed up with living in a male dominated society and this is shown with her reply to Helmer when he says she knows nothing about the society. "No, I don't." Nora said, "But I shall go into that too. I must try to discover who is right, society or me." (Ibsen 83). Ultimately, Nora decides to leave her children and husband. Ibsen develops this male dominated society which pressures Nora to act against the socially correct way by doing what she did. Other than the society, Antigone's values also pressured her to ultimately act against the socially accepted way. ...read more.

(Ibsen 26). As you can see, Ibsen uses dramatic irony to develop Nora's values, which include a secret as they are part of her pride and joy. When Nora is reminded of her values she is almost moved to tears and this builds up pressure. As the play continues Nora's values continue to develop as she realizes her pride and dignity are a great part of her values. Nora's character develops and she grows smarter learning that she cannot live by a society which makes women inferior to men. Through out the play, Nora's values pressure her to ultimately act against the socially accepted way. Overall, it is seen that Anouilh and Ibsen, develop a male dominated society in their plays. Both of the plays Antigone and A Doll's House portray how the female protagonist acted in response to the society. Though the female protagonists show to be quite different, their male dominated society and values including self dignity are similar. Ultimately, Antigone's society and values pressured her to act against Creon and the society resulting in her death. In comparison, Nora is pressured by her society and values and therefore acts against her society by leaving her husband and children. Even though the outcomes of the plays are very different, there is a clear comparison between the female protagonists. ...read more.