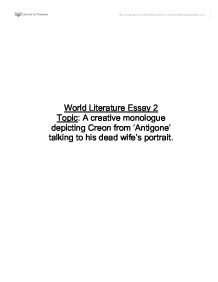 A creative monologue depicting Creon from Antigone talking to his dead wifes portrait.

World Literature Essay 2 Topic: A creative monologue depicting Creon from 'Antigone' talking to his dead wife's portrait. Those who have read the play Antigone by Sophocles will all share the common sentiment that Creon, uncle of Antigone, was the 'villain' of the tragedy. Indeed his autocratic attitude and his sexist opinions are classic characteristics in one. However, in the final moments of the play, readers are exposed to a vulnerable man who seemingly regrets his previous judgements. This leads to the important revelation that there are two sides to every story. It is true that Creon's primary motivation for freeing Antigone was purely self-serving, but what about after the end of the play? In accordance with the assumption that Creon has lost his crown, this monologue serves the purpose of letting his feelings be known after the initial devastation has faded away. The language he uses in this is far more coherent than the last moments of the play and gives him the opportunity to let his grief ...read more.

It could have been safely assumed that he would have had the benefit of a fruitful rule over grateful citizens, with the blessings of Zeus himself showered on him! Now, there is strife in the heavens that impairs judgements and tilts the balance of justice. I, that very king, find myself ousted from my seat of principle, thrust forcefully from the safety of my cocoon out into a barren wasteland that mirrors my existence. I, who swore never to let a loved one, especially a woman impair my judgment and my sense of duty to my city now taste irony, bitter as Artemisia on my tongue as I confide in you, thoughts of a troubled nature, my wife, my only confidant. From within the confines of your panelled home you look down on me with judgement in your visible eye despite an ever ready ear with which you listen to your husband's ruminations. ...read more.

When ruling, partiality must never be shown in all fairness to the citizens, so I did what I felt was right by condemning the girl the way I did. It is ironic indeed that when she poured dust on Polyneices the public celebrated and mourned her. Had I deigned to do the same, I would have been lower than the traitor himself in their eyes! How then, was it fair that in the end, despite my impartiality I was the one who lost the most? Was...Am I a bad man? But no! I should have abandoned my suspicion for that was my shortcoming. I should have listened to my dear son, who tried to impress his ideas upon me. In accordance with his words...when I was laid bare, I was found to be an empty, empty man! Oh Eurydice, sweet woman, forgive your empty husband of his follies as he pays dearly for them now! As my mind slowly unravels, I am once again back where I started...Oh! Give me a cup of Borage, so that I may revel in the bliss of forgetfulness... ...read more.