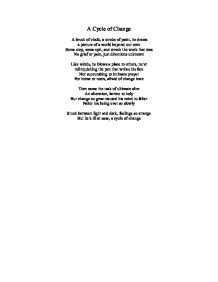 A Cycle of Change

A Cycle of Change A brush of chalk, a stroke of paint, he draws a picture of a world beyond our own Some step, some spit, and wreck the work that was No grief or pain, just directions unknown Like winds, he blows a place to others, ne'er relinquishing the pen that writes his fate Nor succumbing to intimate prayer For home or roots, afraid of change irate Then came the task of ultimate alter An alteration, latrine to holy But change so great caused his mind to falter Falter his being ever so slowly Stuck between light and dark, feelings so strange But he's ill at ease, a cycle of change Analyzing a Cycle of Change "A Cycle of Change" is based on the experiences of the pavement artist in "Such a Long Journey". The pavement artist is shown as a metaphorical representation of Gustad as both are seen as individuals who are unable to adapt to change in their lifestyles. While Gustad who is used to a simple life cannot accept that change is inevitable, the pavement artist is uses to a life of change and constantly moving cannot accept a life of bonds, home or family. ...read more.

The artist is also used to drawing fast and this can proved by the speed he draws the paintings on the wall. Gustad when he sees them is impressed by the progress of the artist. The carefree is the artist's personality - he's an extremely carefree person. He'd rather be floating around place to place then be tied down with family and home. And the daring is his life. He sleeps outside his paintings whether it be raining or sunny, or murders or sirens. He is also daring as he always finds the strength to start over again, to begin something all over again. In the second line of the second stanza there is a metaphor, with pen referring to God or destiny. Through his drawings on the wall, his interest in cultures and religions and his degrees, it can be perceived that the artist is religious and believes in God. A further proof of this is time where he and Gustad were parting, the artist says - "Luck is spit of gods and goddesses" - this shows that the artist does truly believe in God. Such a comparison also shows that the artist believes that this way of life was not chosen by him but rather by God and destiny and while he prefers this life, it was written by God and so he has no choice but to follow this life. ...read more.

"Stuck between light and dark, feelings so strange" is a mix of cretic dimeter, one trochaic meter and one iambic meter. This was done to show the complexity of the artist as that is exactly what the line refers to in meaning. This complex poetic meter deepens the sense of confusion in the sonnet. The second line in the couplet "But he's ill at ease, a cycle of change" is also half iambic and half anapestic as it shows the oxymoron between the two as iambic meters are supposed to bring a tranquil and serene tone to the sonnet and the anapestic meter is supposed to bring a sense of urgency and relentlessness which is an oxymoron. Also if one was to imagine the line continued this way it would be a never-ending cycle, continuously changing amidst the two - therefore representing the cycle of change. In the final analysis, "A Cycle of Change", through its meaning, uses of the different devices of literature and poetic meters presents the life of artist as a metaphor for the cycle of change. With the double meanings, emphasizing important aspects, and showing connections through uses of metaphors, similes, anaphora, polyptoton, or the poetic feet, "A Cycle of Change" truly describes the life of the artist and the cycle itself. ...read more.