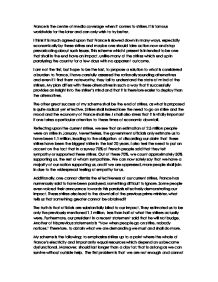 France is the centre of media coverage when it comes to strikes. It is famous worldwide for the later and can only wish to try better. I think it is much agreed upon that France is slowed down in many ways, especially economically by these strikes and maybe one should take action now and stop prevaricating about such issues. This scheme which I present is intended to be one that shall in the end have an impact, unlike many of the strikes which end up in paralysing the country for a few days with no apparent outcome. I am not the first, but hope to be the last, to propose a solution to what is considered a burden to France. I have carefully assessed the rationally sounding alternatives and even if I find them noteworthy, they fail to understand the state of mind of the strikers. My plan differs with these alternatives in such a way that it successfully provides an insight into the striker's mind and that it is therefore easier to deploy than the alternatives. ...read more.

The truth is that officials are substantially blind to our impact. They estimated us to be only the previously mentioned 1.1 million, less than half of what the strikers actually were. Furthermore, our president in a recent statement said that he will not budge. Another of his previous statements is "Now when people go on strike, nobody notices." Therefore, to obtain what we are demanding we must and shall do more. My scheme is the following; to emphasize strikes up to a point where the whole of France's electricity and importantly equal resources which depend on us become dysfunctional. Moreover, should last longer than a day for; that is as long as we can survive without outside help. The first problem is that we are not enough and cannot expect to have such an impact. However, I shall recall that we have a substantial amount of the population to back us up and if we can encourage them to join us, then effectively we will be able to provide such a big impact. ...read more.

Or, would you rather have regularly repeating strikes causing only minute impact? Anyway I should like to ask you to start warning and recruiting fellow workers and neighbours so that we can start this scheme as soon as possible. I would also like to add that it might be advisable for some of you to start staking up food in case a minor famine results. As an analogy, we are just stuck in a hole that we have already started digging and the most effective way to get out is to continue digging so that we will be able to come out on the other side, it seems quite unreasonable to try and use a ladder symbolizing the unfruitful negotiations to get us out the quick and easy way. My desire is that after an event similar to a revolution our need for strikes will not be sustained and we will all be able to enjoy life at its fullest. For we should be prepared for such drastic measures allowing us to obtain our demands. ...read more.