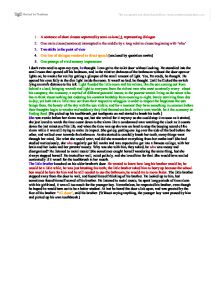 A Pastiche of Virginia Woolf's Writing

1. A sentence of short clauses separated by semi-colons [;], representing dialogue 2. One main clause [sentence] interrupted in the middle by a long relative clause beginning with 'who' 3. Two shifts in the point of view 4. One line of dialogue rendered as direct speech [enclosed by quotation marks] 5. One passage of vivid sensory impressions I don't even need to open my eyes, he thought. I can get to the toilet door without looking. He stumbled into the small room that opened off his bedroom, and in the relative darkness of the bathroom without the door open or lights on, he awoke for real by getting a glimpse of the small amount of light. Yes, I'm ready, he thought. ...read more.

[He picked up his toothbrush, put toothpaste on and started to brush his teeth.] She was awake before her alarm rang out, but she waited for it anyway so she could stop it as soon as it started, she just loved to watch the time count down to the alarm like a condemned man watching the clock as it counts down the last minutes of his life, and when the time was up she was on hand to stop the beeping sound of the alarm while it was still trying to make its impact. She got up, putting one leg over the side of the bed before the other, and walked over towards the bathroom. As she started to carefully brush her teeth, many things went through her mind, like what she would wear; and did she remember everything from her maths test? ...read more.

asked him to hurry up because the school bus would be here for him and he still needed to use the bathroom; he would try to move faster. The little brother stepped away from the door to wait, and found himself thinking of his brother. He looked up to him, but sometimes found himself scared of his brother. He listened to metal music, he spent long periods of time alone with his girlfriend, it was all too much for the younger boy. Nevertheless, he respected his brother, even though he hoped he would turn out to be a better student. At last he heard the door click open, and was greeted by the face of his brother. "All done", said his brother. [Without saying anything, the younger boy went passed by him and picked up his own toothbrush.] ...read more.