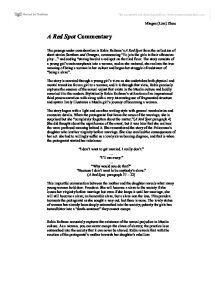 A Red Spot Commentary The passage under consideration is Rabia Raihane's A Red Spot from the collection of short stories Sardines and Oranges, commencing "To join the girls in their afternoon play..." and ending "staring hard at a red spot on the tiled floor. The story consists of a young girl's metamorphosis into a woman, and as she matured, she realizes the true meaning of being a woman in her culture and began her struggle of resistance of "being a slave". The story is narrated through a young girl's view as she undertakes both physical and mental transition from a girl to a woman; and it is through that view, Rabia precisely captures the essence of the sexual unjust that exists in the Muslin culture and boldly revealed it to the readers. ...read more.

... "I'll run away." ... "Why would you do that?" "Because I don't want to be anybody's slave." (A Red Spot, paragraph 17 - 22) This impactful conversation between the mother and the daughter reveals what many young women hold dear: Freedom. She will become a slave to the society if she looses her virginity before marriage but even if she keeps it until her marriage, she will still become a slave; an honorable slave, but a slave non the less. This paradox torments the protagonist as she sought a way out, but there is none. The lowly status of women has already been deeply entrenched into the society; puberty for girls has turned bitter into a "death-sentence" they cannot escape. Rabia Raihane accurately captures the existence of the sexual prejudice in Muslin culture. ...read more.

news of her marriage, then the story leaps and describe how she suddenly realizes the world is not the same for her anymore. Her mind began to battle, jumping from a story of the policeman's daughter, to her own memories regarding virginity, and finally, she confronts her mother. The plot of the story was confusing at the start but it all made sense in the end and that's when the story makes its impact. In conclusion, this passage effectively serves as a lively narration for the protagonist's transition from a young girl to a woman which Rabia Raihane exploits to reveal the sexual prejudice that exist in the Muslin culture. Through the protagonist's attempt to break free of slavery, Rabia is conveying the desire for freedom of the women. Rabia's skillful use of interesting structure and excessive information makes A Red Spot an entertaining novel. Mingna (Lina) Zhou ...read more.