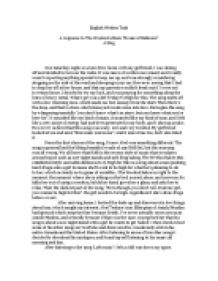 ﻿English Written Task A response to The Weeknd Album ?House of Balloons? A blog One Saturday night, in a late drive home with my girlfriend, I was dozing off and decided to turn on the radio. It was more of a reflex movement, and I really wasn?t expecting anything special to keep me up, and was strongly considering stopping on the side of the road and sleeping in my car. However, seeing that I had to drop her off at her house, and that my parents wouldn?t freak out if I were not to return home, I decided to try my luck, and was praying for something along the lines of heavy metal. What I got was Abel Tesfaye?s High for this. The song starts off with a low churning tone, which made me feel uneasy from the start. Then there?s the drop, and that?s where Abel?s honeyed vocals come into fore. He begins the song by whispering tunefully ?you don?t know what?s in store, but you know what you?re here for?. ...read more.

He talks her out of using a condom, holds her hand, gives her a glass, and asks her to relax. Then the darkest part of the song, ?Even though, you don?t roll, trust me girl, you wanna be high for this?, the girl needs to be high, regardless if she?s done drugs before or not. After arriving home, I looked the dude up and discovered a few things about him, which caught my interest. Abel Tesfaye is an Ethiopian of Amish/Muslim background which surprised me because firstly, I?ve never actually come across an Amish-Muslim, and secondly because if that was the case, it surprised me that his song is about a one night stand with a girl he wants to get ?faded?. I then checked out some of his other songs on YouTube and discovered he was already a hit in his native Canada and the United States. After listening to some of his other songs I decided to download his mixtapes, and found myself listening to his music all morning and day. ...read more.

I then decided to listen to the House of balloons/glass table girls which was a song that found the equilibrium between the chilled R&B style and the desperate self imposed hatred on others. It?s that equilibrium that defines what The Weeknd?s albums are all about. This song is a remake of the Siouxsie and the Banshees Happy house song, a darker scarier version. This song describes how a deeply self-destructive male is throwing himself onto women in a way only a few women can legally defend themselves against. It?s a song about a house where drugs are the norm, and where the girls can get whatever they want as long as they have sex. Its a ?happy house?, where everybody is happy, but infact, the truth is nobody is happy. This artist has come up with a new age of music that most artists would shy away from, a new age of music that is different and scary. The songs are very listenable, but they are all trying to pull and distort the familiar R&B into a new shape. The songs are filled with chilly minimalism and sparse, crisp beats that attract the teenagers who might consider themselves the Weeknd-esque characters. ...read more.