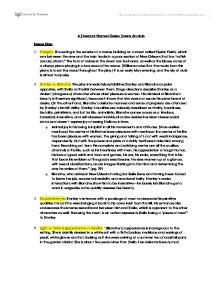 A Streetcar Named Desire: Scene Analysis Scene One: * Imagery: The setting is the exterior of a corner building on a street called Elysian Fields, which runs between the river and the train tracks in a poor section of New Orleans that has "raffish [crude] charm." The hum of voices in the street can be heard, as well as the bluesy notes of a cheap piano playing in a bar around the corner. (Williams notes that the music from this piano is to set the mood throughout the play.) It is an early May evening, and the sky at dusk is almost turquoise. * Stanley vs. Blanche: The play immediately establishes Stanley and Blanche as polar opposites, with Stella as the link between them. Stage directions describe Stanley as a virulent (dangerous) character whose chief pleasure is women. His dismissal of Blanche's beauty is therefore significant, because it shows that she does not exude his same brand of desire. On the other hand, Blanche's delicate manners and sense of propriety are offended by Stanley's brutish virility. Stanley's qualities are variously described as vitality, heartiness, brutality, primitivism, and lust for life, animalistic. ...read more.

She is about five years older than Stella. Her delicate beauty must avoid a strong light. There is something about her uncertain manner, as well as her white clothes, that suggests a moth" (pg. 15) o Light is symbolic of reality. The fact that Blanche's character must avoid a strong light suggests that as a character, Blanche chooses to avoid reality, and instead, turn to illusion o The metaphor of Blanche being compared to a moth, a creature of the night that is drawn to light suggests that Blanche is drawn to reality, which foreshadows her downfall and metaphoric death when reality becomes unavoidable. o Light is also symbolic of the truth, which Blanche has distanced herself from * Journey to Destruction & Verbal Irony: "They told me to take a street-car named Desire, and then transfer to one called Cemeteries and ride six blocks and get off at- Elysian Fields!" (pg. 15) o Blanche speaks these words to Eunice and the Negro woman upon arriving at the Kowalski apartment at the beginning of Scene One. She has just arrived in New Orleans and is describing her means of transportation to her sister's apartment. ...read more.

Turn that off! I won't be looked at in this merciless glare!" (pg. 19) * The light, or the truth, is obviously bothering Blanche. * Light vs. Dark & Appearance vs. Reality: "God love you for a liar! Daylight never exposed so total a ruin!" (pg. 21) * "You've spilt something on the pretty white lace collar!" (pg. 22) o Suggests that Stella is no longer pure, in Blanche's opinion, because of where she is living * Double Entente & Foreshadowing: "Some people rarely touch it, but it touches them often." (pg. 30) o Drink represents desire. Stanley is in fact saying, that some people rather touch what they desire, but desire will touch them, foreshadowing Blanche being touched by he who desires her (Stanley). * "I never was a very good English student" (pg. 30) o Signifies the differences between Stanley and Blanche * Double Entente: "You going to shack up here" (pg. 31) o Shack = sex * Blanche feels sick throughout this scene, which is caused, metaphorically, by her lies. Reality is catching up to her, and she is feeling it strangle her. o "As you may have noticed-I'm-not very well..." (pg. 23) o "I'm afraid I'm- going to be sick!" (pg. 81) ...read more.