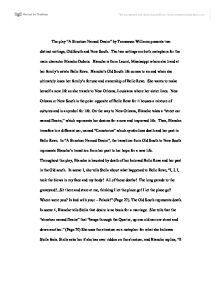 The play "A Streetcar Named Desire" by Tennessee Williams presents two distinct settings, Old South and New South. The two settings are both metaphors for the main character Blanche Dubois. Blanche is from Laurel, Mississippi where she lived at her family's estate Belle Reve. Blanche's Old South life comes to an end when she ultimately loses her family's fortune and ownership of Belle Reve. She wants to make herself a new life so she travels to New Orleans, Louisiana where her sister lives. New Orleans or New South is the polar opposite of Belle Reve for it houses a mixture of cultures and is a symbol for life. On the way to New Orleans, Blanche takes a "street car named Desire," which represents her desires for a new and improved life. ...read more.

All of those deaths! The long parade to the graveyard!...Sit there and stare at me, thinking I let the place go! I let the place go? Where were you? In bed with your - Polack!" (Page 27). The Old South represents death. In scene 4, Blanche tells Stella that desire is no basis for a marriage. She tells that the "streetcar named Desire" that "bangs through the Quarter, up one old narrow street and down another." (Page 70) She uses the streetcar as a metaphor for what she believes Stella feels. Stella asks her if she has ever ridden on the streetcar, and Blanche replies, "It brought me here, where I'm not wanted and where I'm ashamed to be..." ...read more.

(Page 65). Blanche responds, "I don't understand you. I don't understand your indifference. Is this a Chinese philosophy you've - cultivated?" (Page 65). Here, Blanche is not used to this mixture of cultures in the New South. She must realize that learning to adapt and tolerate everyone is part of her new life. In the play, the contrasting settings of Old South and New South represent Blanche is two different ways. Old South represents death, whereas New South represents life. After Blanche has to face many hardships - losing her family, husband and estate, she moves to the New South in hope of a new life. The two different settings are important to the play because they represent who Blanche was and who she wants to become. Her journey from the Old South to the New South embodies her optimistic transformation from death to life. ...read more.