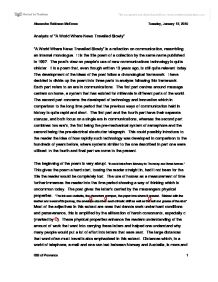 A world where news travelled slowly

Analysis of "A World Where News Travelled Slowly" "A World Where News Travelled Slowly" is a reflection on communication, resembling an internal monologue. It is the title poem of a collection by the same name published in 1997. The poet's view on people's use of new communications technology is quite sinister. It is a poem that, even though written 13 years ago, is still quite relevant today. The development of the ideas of the poet follow a chronological framework. I have decided to divide up the poem into three parts to analyse following this framework. Each part refers to an era in communications. The first part centres around message carriers on horse, a system that has existed for millennia in different parts of the world. The second part concerns the developed of technology and innovation which in comparison to the long time period that the previous ways of communication held in history is quite rapid and short. The first part and the fourth part have their separate stanzas, and both focus on a single era in communications, whereas the second part combines two era's, the first being the pre-mechanical system of semaphore and the second being the pre-electrical six-shutter telegraph. ...read more.

The combination of the French revolution and "the judgement of a swing in a vertical arm" can give connotations of the guillotine and executions. This also shows the not so insignificant probability that messages could be misread and lead to wrong decisions being made. Which in a time of war, and especially revolution, can mean the difference between life and death. Again we come back to the amount of work that had to be put into transmitting messages. "News travelled letter by letter, along a chain of towers, each built within telescopic distance of the next." Before this system could even be properly implemented, towers had to be built, and for this system to be useful at all it had to spread over quite large distances and all the towers had to be manned at all hours. The poet points out that messages were sent letter-by-letter. A misreading of one or two key letters could change the meaning of the message. This does not seem so unlikely when one considers all the variables that could affect the reading, This could be pointing out that every letter is important, precious and worth transmitting. ...read more.

However, for many this will first register as the city hall catching fire. The imagery of fire is continued in the last line. The last line is very flat, this is amplified as it stands in contrast to the last lines of the previous two stanzas which both have weak caesuras in, giving them much more dynamic. The fire imagery combined with the very flat nature of the last line gives the reader a feeling that the poet wished that city hall had burnt down, almost resentful. When looking back on the second to last line of the poem - "there was such fireworks, City Hall caught light." - one gets a feeling that the poet is telling of the "ignorant" young who did not understand what they were starting. Throughout the poem there is quite a bit of focus on the amount of effort we humans put into communication. the general advancement of this theme is that as our technology has advanced and it has become easier and easier to communicate over distances, many have forgotten how precious this is. To me it seems that the poet feel's that we have stopped caring. Alexandra Robinson McEnroe Tuesday, January 12, 2010 Alexandra Robinson McEnroe Tuesday, January 12, 2010 IBS of Provence 1 IBS of Provence 1 ...read more.