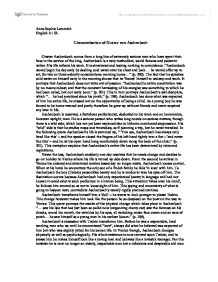 Anne Sophie Lemmich English A1 SL Characterisation of Gustav von Aschenbach Gustav Aschenbach comes from a long line of extremely serious men who have spent their lives in the service of the king. Aschenbach is a very methodical, world famous and pedantic writer. His life reflects his work. It is structured and leaving nothing to coincidence. "Aschenbach would begin his day early by dashing cold water over his chest and back... he would offer up to art, for two or three ardently conscientious morning hours..." (p. 200). The fact that he splashes cold water on himself early in the morning shows that he 'forces' himself to wakeup and work. It portrays that Aschenbach does not write out of passion. ...read more.

His "wild" side is that he studies maps and timetables, as if planning a trip, but he never travelled. In the following quote Aschenbach's life is summed up, " 'You see, Aschenbach has always only lived like this' - and the speaker closed the fingers of his left hand tightly into a fist - 'and never like this' - and he let his open hand hang comfortably down along the back of the chair." (p. 201). This metaphor explains that Aschenbach's entire life has been determined by rules and regulations. Never the less, Aschenbach suddenly one day resolves that he needs change and decides to go on holiday to Venice where his life is turned up side down. ...read more.

saw his lips that has just been so pallid now burgeoning cherry-red; saw the furrows on his cheeks, round his mouth, the wrinkles by his eyes, all vanishing under face cream and an aura of youth... he saw himself as a young man in his earliest bloom." (p. 259). Aschenbach's obsession with Tadzio transforms him. Before he was a respectable, hard working man who up until he encountered "love", always did what he believed was expected of him but who was slightly pitied for his barren life. In Venice though, Aschenbach changes physically as well as psychologically. His whole existence is now centred upon Tadzio, and to please him he makes himself look like a young man and behaves like a lovesick teenager. For the outsider he is now no longer an elderly, respectable man but a ridiculous and despicable old man. ...read more.