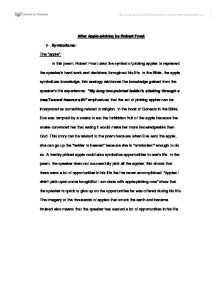 After Apple-picking by Robert Frost > Symbolisms: The "apple": In this poem, Robert Frost uses the symbol of picking apples to represent the speaker's hard work and decisions throughout his life. In the Bible, the apple symbolizes knowledge; this analogy reinforces the knowledge gained from the speaker's life experiences. "My long two-pointed ladder's sticking through a tree/Toward heaven still" emphasizes that the act of picking apples can be interpreted as something related to religion. In the book of Genesis in the Bible, Eve was tempted by a snake to eat the forbidden fruit of the apple because the snake convinced her that eating it would make her more knowledgeable than God. This story can be related to the poem because when Eve eats the apple, she can go up the "ladder to heaven" because she is "omniscient" enough to do so. A freshly picked apple could also symbolize opportunities in one's life. ...read more.

The poem has multifarious end-rhymes, but it doesn't have a regular pattern. "I was well/Upon my way to sleep before it fell/And I could tell" is an example of some end-rhymes that allows readers to vicariously imagine an image where the speaker is drowsing off with his head slowly going down and up again. The rhyme words "well", "fell", and "tell" emphasizes deep sleep. There were also some assonance present in the poem: "Stem end and blossom end," and "Magnified apples appear and reappear". These assonances were also used to provide readers with a drowsy feeling. The number of syllables of each line of the poem varies from two to eleven syllables. The longer lines of the poem add to the sleepy mood of the poem but the short and abrupt lines create a sense of hesitation and the sudden awake of the speaker from his sleep. For example: "Cherish in hand, lift down, and not let fall" shows the speaker's dreaming state of mind while "For all" emphasizes a sudden alarm for the speaker. ...read more.

Another "Sleep" is repeated in the same line: "This sleep of mine, whatever sleep it is." The last the lines of the poem: "Long sleep, as I describe its coming on/Or just some human sleep" nicely ends the poem with a sleepy tone. This ambiguous line leaves readers uncertain whether the speaker is indeed just having some "human sleep" or has already entered his "long sleep". "Long sleep" as mentioned above, was an euphemism for death. Frost juxtaposed the words "long sleep" and "human sleep" in order to contrast the fact that "long sleep" implies 'life after death' and "human sleep" implies 'boring and old life". The speaker is being a little sarcastic because he doesn't even care whether he is going to die or not. He says he might go for a "long sleep" or just a normal "human sleep". The poet raises a question to readers about whether humans know what happens after they die. Humans cannot know what comes after death; it is only through their faith in a religion that can give them a sense of where they are going after death. ...read more.