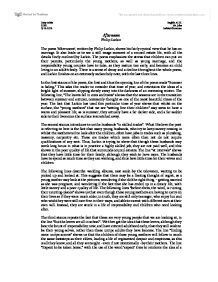 Afternoons Philip Larkin The poem 'Afternoons', written by Philip Larkin, shows his fairly cynical view that he has on marriage. It also leads us to see a still image moment of a council estate life, with all the details finely outlined by Larkin. The poem emphasizes the stress that children can put on their parents, particularly the young mothers, as well as young marriage, and the responsibility young couples have to take, as they mature too early, and become an child living in an adult's body. There is a sense of decay and a decline throughout the whole poem, and Larkin finishes on an extremely melancholy note, with the last three lines. In the first stanza of the poem, the first and thus the opening line of the poem reads "Summer is fading." This asks the reader to consider that time of year, and entertains the ideas of a bright light of summer, slipping slowly away into the darkness of an oncoming winter. The following line, "The leaves fall in ones and twos" shows that the seasons are in the transition between summer and autumn, commonly thought as one of the most beautiful times of the year. The fact that Larkin has used this particular time of year shows that whilst on the surface, the "young mothers" that we see "setting free ...read more.

Instead, they are stuck in a life of responsibility and children who need looking after. The third stanza repeats the fact that these are very young people that we are looking at, in the line "But the lovers are all in school". We then get the idea that these lovers, although they bear the brunt of responsibility now, and have entered adulthood early, that they still wish to be their young selves, rather than these unripe adults they have become. The line "finding more unripe acorns" shows us that the children of these young mothers will follow in much the same footsteps as their elders, leading a life of regimented despair and emptiness, as this is all they know, and all they are taught - even if not intentionally - by their mothers. The line "Expect to be taken home," with the use of the word 'expect' tries to reinforce the idea of a routine and regimented lifestyle, and shows that the children are familiar with these ideas and know that they will come. The last lines of stanza three, and therefore also the closing lines of the poem, read "Their beauty has thickened. Something is pushing them to the side of their own lives." ...read more.

Take for example, the line "Expect to be taken home." The use of the word 'expect' brings about the ideas of a knowing, routine lifestyle, one that is done every day without emotion or thought. A regimented, structured, time-table of a life, designed to fill the gaps that may occur. Larkin uses the metaphor "unripe acorns," which allows us to decide for ourselves what the "unripe acorns" may be. The fact that he has let us do this, gives us our own insight into the poem, letting us take it for what we want it to be. The poem as a whole shows a biased side of Larkin's atheist ideas about marriage. Although the poem strictly follows Larkin's ideas, we are left to make up our own minds about the extremities described. The poem's mood is melancholy, dark and empty, and shows us life without emotion or pain. It is robotic, and gives us a sense of helplessness. The poem and its poet exhibit ideas of fraught marriage, decay, decline and pain. They are issues that many can relate to, and are contemplated carefully and with a lot of thought on the poet's part. It is well written, and reflects a true image of young love, one that should be learnt from, and taken notice of. ?? ?? ?? ?? Daisy Atkin English A1 HL 511581 Mr. John 07-01-2008 Larkin/Afternoons ...read more.