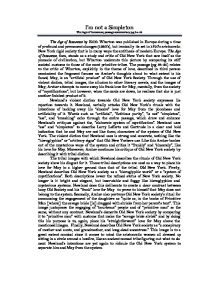 I'm not a Simpleton The Age of Innocence, passage commentary pg 34-35 The Age of Innocence by Edith Wharton was published in Europe during a time of profound and permanent changes (1920's), but ironically its set in 1870's aristocratic New York rigid society that is in many ways the antithesis of modern Europe. The Age of Innocence, then, stands as a study and critic of Old New York that saw itself as the pinnacle of civilization, but Wharton undercuts this picture by comparing its stiff societal customs to those of the most primitive tribes. The passage (pg 34-35) relates to the critic of Wharton, explicitly in the theme of love; described in third person omniscient the fragment focuses on Archer's thoughts about to what extent is his fianc�, May, is an "artificial product" of Old New York Society. Through the use of violent diction, tribal images, the allusion to other literary novels, and the images of May; Archer attempts to move away his frank love for May, mentally, from the society of "mystifications", but however, when the cards are down, he realizes that she is just another finished product of it. ...read more.

Secondly, Archer also portrays Old New York society's ritual for announcing the engagement of the daughters as "quite as, in the books of Primitive Man [where] the savage bride [is] dragged with shrieks from her parent's tent". This image juxtaposes the engaging of "courteous" people and of "primitive man" as the same, without any contrast. Newland's demerits Old New York society by comparing it to "primitive man" with customs that make the "savage bride shriek" and by doing this his purpose is to, again, place his "straightforward" love for May above the mentioned images. Finally, Newland describes Old New York society as "a conspiracy of mother and aunts, and grandmother, and long-dead ancestress." This image is to a great extent comical since it comes to mind the aristocratic women all dressed up sitting in a circle around a bonfire, like an ancient nomad tribe figuring out what to do next. Newland's intentions are yet again to ridicule the Old New York system to separate him and May from the system. ...read more.

Archer tries to be, "delighted in [May's] radiant good looks, in her health, her horsemanship, her grace" and "straightforward, loyal, and brave", as ways that separate her from Old New York society, but she ultimately is - under her "frankness" and straightforwardness - an "artificial product...cunningly manufactured by the conspiracy of mother and aunts." May ultimately is a homogenous, marketable, product of frankness and innocence, manufactured by the proud conspiracy of aunts and mothers. Therefore the final images of May show how Archers attempts to separate his love for May from the intangible and fake truth of Old New York society; the essence of May was created by the systems of "hieroglyphics". Throughout the passage Newland Archer attempts to breakaway his love for May from the tribal rituals of Old New York society, but he ultimately realizes that she was always part of it. The passage from Edith Wharton The Age of Innocence uses aggressive diction, tribal imagery, the allusion of other works, and an Image of May to show Newland attempts to mentally separate May from Old New York society, but however in the conclusion of the passage he finds out that May belongs to the system. ?? ?? ?? ?? ...read more.