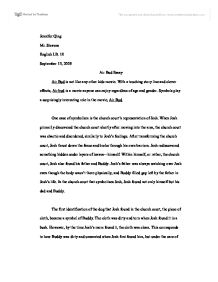 Jennifer Qing Mr. Stevens English I.B. 10 September 13, 2009 Air Bud Essay Air Bud is not like any other kids movie. With a touching story line and clever effects, Air bud is a movie anyone can enjoy regardless of age and gender. Symbols play a surprisingly interesting role in the movie, Air Bud. One case of symbolism is the church court's representation of Josh. When Josh primarily discovered the church court shortly after moving into the area, the church court was chaotic and disordered, similarly to Josh's feelings. ...read more.

The first identification of the dog that Josh found in the church court, the piece of cloth, became a symbol of Buddy. The cloth was dirty and torn when Josh found it in a bush. However, by the time Josh's mom found it, the cloth was clean. This corresponds to how Buddy was dirty and unwanted when Josh first found him, but under the care of Josh, Buddy became clean and loved. The love is evident when Josh's mom put the clean cloth beside the picture of Josh with his dad. ...read more.

In an attempt to hide his fear, Buddy buried the newspaper each morning. Fear, however, returns regardless of how well you hide it. The source of fear-Norm Snively-appeared after Josh's mom found the buried newspapers. Therefore, instead of continuing to avoid fear, Buddy surpassed his fear at the end of the movie when he tore apart Norm's newspaper. The newspaper symbolizes the fear Buddy learns he can't avoid. The church court, the piece of cloth, and the newspaper are some symbolism effects from the movie, Air Bud. The director produced the movie with impressively decisive and insightful details. Watching Air Bud once is not enough to understand the full depth of the movie. ...read more.