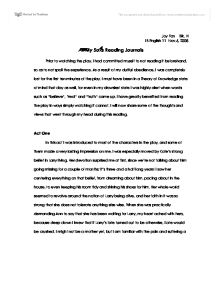 All My Sons Reading Journal

Joy Fan Blk. H IB English 11 Nov.6, 2008 All My Sons Reading Journals Prior to watching the play, I had committed myself to not reading it beforehand, so as to not spoil the experience. As a result of my dutiful obedience, I was completely lost for the first ten minutes of the play. I must have been in a Theory of Knowledge state of mind that day as well, for even in my drowsiest state I was highly alert when words such as "believe", "real" and "truth" came up. I have greatly benefited from reading the play in ways simply watching it cannot. I will now share some of the thoughts and views that went through my head during this reading. Act One In this act I was introduced to most of the characters in the play, and some of them made a very lasting impression on me. I was especially moved by Kate's strong belief in Larry living. Her devotion surprised me at first, since we're not talking about him going missing for a couple of months; it's three and a half long years! I saw her centering everything on that belief, from dreaming about him, pacing about in the house, to even keeping his room tidy and shining his shoes for him. ...read more.

It makes me look like a bum!" In the earlier act she had merely occurred to me as one who was insecure, practical, and jealous. Insecure she was regarding her own body size, practical she was regarding money, and jealous she was of her neighbours, who seemed to have it all. Upon reading Act Two, I began to sympathize even more for the parents. This sympathy was strongest when Kate told her son that "we're dumb, Chris. Dad and I are stupid people. We don't know anything. You've got to protect us". Her vulnerability and yearning for care started making me see Chris in a new light, in which he is the selfish son that will sacrifice the well-being of his parents for his own gain. To my surprise, I started feeling fractions of the same sympathy for Joe, even though I had been suppressing this feeling due to the notion that he had sacrificed the lives of twenty-one pilots, as well as his partner, for his own gain. In his fury, Joe had declared that "a father is a father!" A proclamation that I had heard numerous times during my time spent with my own father. This line, at first sight, might merely seem to be that of indignity, but upon close examination, and in relation to my own personal experience, Joe was merely trying to seize the sense of authority that he felt he was losing with the maturing of his son. ...read more.

In my personal opinion, the revival of the play symbolizes it has at least some degree of relevance to current events, namely the Iraq war. Have times really changed? Over sixty years after the end of World War II, military contractors are still profiting greatly from the prolonged Iraq war. While soldiers are in the battlefields sacrificing their lives for the sake of their country, military companies are earning tens of billions of dollars! This play struck me deeper than Oedipus the King and King Lear ever had. All My Sons brought me to realize that although I might just be a single nucleus in this whole world of matter, I do have some sort of influence on the people surrounding me. For this minimal purpose, everyone should take on some degree of social responsibility. I also saw reflections of the relationship between my father and me and that of Joe and Chris. For the longest time I had had a strained relationship with my father. Ignorance to his hardships on my side and lack of tolerance on his side led to more than one case of explosions. I sincerely hope that this play will in some way give me more insight on the way I should treat my father. Hopefully, we can gain a term of mutual respect and understanding, and not result in a catastrophe like Joe and Chris had. ...read more.