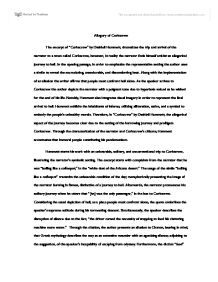 Allegory of Corkscrew The excerpt of "Corkscrew" by Dashiell Hammett, dramatizes the trip and arrival of the narrator to a town called Corkscrew, however, in reality the narrator finds himself amidst an allegorical journey to hell. In the opening passage, in order to emphasize the representative setting the author uses a simile to reveal the excruciating, unendurable, and discomforting heat. Along with the implementation of an allusion the writer affirms that people must confront hell alone. As the speaker arrives to Corkscrew the author depicts the narrator with a poignant tone due to hyperbole voiced as he wished for the end of his life. Notably, Hammett also integrates visual imagery in order to represent the final arrival to hell. ...read more.

Afterwards, the narrator pronounces his solitary journey when he utters that "[he] was the only passenger," in the bus to Corkscrew. Considering the usual depiction of hell, as a place people must confront alone, the quote underlines the speaker's supreme solitude during his tormenting descent. Simultaneously, the speaker describes the disruption of silence due to the fact, "the driver cursed the necessity of stopping to feed his clattering machine more water." Through the citation, the author presents an allusion to Charon, bearing in mind, that Greek mythology describes the way as an extensive meander with an agonizing silence; adjoining to the suggestion, of the speaker's incapability of escaping from odyssey. ...read more.

Positing his characterization as a pessimistic, despondent, and afflicted man. The depiction accentuates what aspects oblige a person to endure the austere conditions of that day; and eventually go to the ghoulish Corkscrew. Suddenly the speaker "topped a sharp ridge and slid down into Corkscrew." The succinct visual imagery presents the narrator's passage through the devilish portal. Considering that the diction "slid down" suggests the narrator's fall into abyss. Hammett utilizes a concise paragraph, signifying the gate's thinness. Allowing the reader to intuit the character's promenade through the entrance. Marking the shift from the scalding heat on the road, to the blistering heat in Corkscrew. Thus, once the speaker has gone through he realizes that "Corkscrew wouldn't have been impressive at any time." The haughty tone, confirms the protagonist's suspicion about Corkscrew, a city of heinous morals. ...read more.