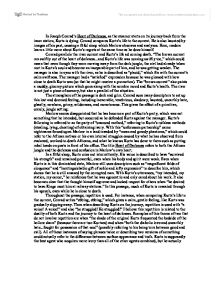 An Analysis of Kurtz's Death Scene in Heart of Darkness

In Joseph Conrad's Heart of Darkness, as the steamer starts on its journey back from the inner station, Kurtz is dying. Conrad compares Kurtz's life to the current. He is also haunted by images of his past, causing a fitful sleep which Marlow observes and analyzes. Here, readers learn a little more about Kurtz's regrets at the same time as he does himself. Conrad parallels the river current and Kurtz's life ad coming death. "The brown current ran swiftly out of the heart of darkness...and Kurtz's life was running swiftly too," which could mean that even though they were moving away from the dark jungle, the eivl had already taken root in Kurtz's soul and become an inseparable part of him, and he was getting weaker. The manager is also in sync with the river, as he is described as "placid," which fits with the current's calm swiftness. The manager had a "satisfied" expression because he was pleased with how close to death Kurtz was (so that he might receive a promotion). The "brown current" also paints a muddy, gloomy picture which goes along with the sombre mood and Kurtz's health. ...read more.

In a fitful sleep, Kurtz cries out intermittently. His voice is described to have "survived his strength" and remained powerful, even when his body and spirit were weak. Even when Kurtz is in this diminished state, Marlow still uses descriptors such as "magnificent folds of eloquence" and "inextinguishable gift of noble and lofty expression" to describe him, which shows that he is still amazed by the corrupted man. With Kurtz's utterances, "my intended, my station, my career," he reinforces that he was egocentric and only cared about his work. It also becomes clear that the thought himself supreme and lacked respect for others when "he desired to have Kings meet him at railway stations." In this passage, much of Kurtz is revealed through his speech, even while he is close to death. Throughout the passage, repetition is used. For instance, when comparing Kurtz's life to the current, Conrad writes "ebbing, ebbing," which gives a calm, gentle feeling, like Kurtz was gradually slipping away. Then when describing Kurtz on the journey, repetition is used with "a voice! A voice!" and also "he struggled! ...read more.

He then says to "the invisible wilderness," "oh, but I will wring your heart out yet," which shows that even though he is on his way out of the darkness (literally, via steamboat), the darkness is still battling with him. Towards the end, Conrad once again brings up the river, saying that "the long reaches were like one and the same reach, monotonous bends that were exactly alike." Because the river was previously compared to Kurtz, it is possible that Conrad means that there are also other men just like Kurtz who appear one way but are dealing with something much darker under the surface. Conrad could mean that everyone's life is like this (also "with secular trees looking patiently," referring to people who are watching you and see you in a false light) although maybe not to the extent as Kurtz. The passage as a whole describes Kurtz as he is dying, and allows readers to know what he is really thinking (since he is only half conscious) as opposed to just being exposed to what he chooses to disclose. The passage shows that he is not just hardened, but a tortured soul and moving towards remorse for his actions. ...read more.