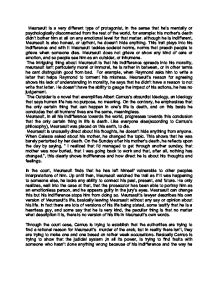 An analysis of The Outsider

Meursault is a very different type of protagonist, in the sense that he's mentally or psychologically disconnected from the rest of the world, for example: his mother's death didn't bother him at all on any emotional level for that matter. although he is indifferent, Meursault is also honest, or upfront, he doesn't hide anything. This trait plays into his indifference and with it Meursault tackles societal norms, norms that preach people to grieve when someone dies. Meursault does not grieve or show any kind of care or emotion, and so people see him as an outsider, or inhumane. The intriguing thing about Meursault is that his indifference spreads into his morality, meursault isn't particularly moral or immoral, he is rather in between, or in other terms he cant distinguish good from bad. For example, when Raymond asks him to write a letter that helps Raymond to torment his mistress. Meursault's reason for agreeing shows his lack of understanding in morality, he says that he didn't have a reason to not write that letter. ...read more.

that I was going back to work and that, after all, nothing has changed.", this clearly shows indifference and how direct he is about his thoughts and feelings. In the court, Meursault finds that he has left himself vulnerable to other peoples interpretations of him. Up until then, Meursault watched the trail as if it was happening to someone else, he lacks any ability to connect his past, present, and future. He only realizes, well into the case at that, that the prosecutor has been able to portray him as an emoitionless person, and he appears guilty in the jury's eyes. Meursault can change this but his indifference stops him from doing so. Meursault's lawyer describes his own version of Meursault's life, basically leaving Meursault without any say or opinion about his life. In fact there are lots of versions of his life being stated, some testify that he is a heartless guy, and some say that he is very kind, the peculiar thing is that no matter what description it is, there is no version of his life in Meursault's own words. ...read more.

The ending to this novel is death, and the court case adequately explains Meursault's growth from an indifferent character who is uncertain about anything, to a character that is certain about only one thing, death. The novel ends with Meursault getting in a tussle with the priest, and eventually losing all hope of getting out his situation, it is here that he accepts that the only thing a man lives for is death. Camus's absurdist ideology is exactly that, he asserts the point that the only important thing in a man's life is death. The outsider explains,and beautifully at that, this ideology in detail. But what Camus is really getting at is exemplified when Meursault realizes the "gentle indifference of the world". He decides that the world is similar to him in that it doesn't pass judgement, nor does it rationalize a person's life. When he realizes this he feels freer because there won;t be false hopes or the illusions of order and meaning. His life is thus simpler, and less burdened. That is the true essence of Camus's ideology. ...read more.