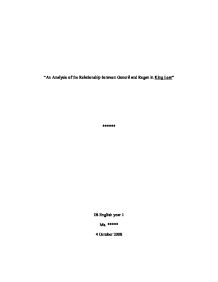 "An Analysis of the Relationship between Goneril and Regan in King Lear" ****** IB English year 1 Ms. ***** 4 October 2008 "An Analysis of the Relationship between Goneril and Regan in King Lear" The historical tragedy of King Lear by William Shakespeare revolves around deceit, tragedy, and violations of social statuses. King Lear lives in a time when offspring contrive against their fathers, friends become enemies, and even the most honesty of characters die in agony as the story reaches its unfortunate ending. Shakespeare, in designing the plot, intends to enlighten us morally on multiple magnitudes. We are often told that Goneril and Regan are "bad" characters, and that their collaborations are what stimulate tragedy, misfortune, and the ultimate death of both primary and secondary characters. Through my experience with King Lear, I do not disagree with this view but rather extend this theory. Despite what is characteristically evident of each player in King Lear, Shakespeare leaves much room for in-depth discussion and further interpretations of his characters. The significant and special relationship between Goneril and Regan not only stimulates tragedy and misfortune but also illustrates major thematic ideas and advances the plot in ways that only Goneril and Regan could. ...read more.

Given the period of the Elizabethan era, it was customary for wives to submit and serve their husbands, however, when Albany criticizes Goneril's harsh treatment of her father, she ignores him insults his character: "Milk-livered man, Thou bear'st a cheek for blows, a head for wrongs, Who hast not in thy brows an eye discerning Thine honor from thy suffering, that not know'st Fools do those villains pity who are punished Ere they have done their mischief." (IV.i.51-56) When Albany tries to correct and control the situation, Goneril further insults him by telling him to "Marry, [his] manhood-mew!" This is not an outstanding case of obstinacy for Goneril as she kisses Edmund passionately in the upcoming scene. Not only is Goneril obstinate in her treatment of Albany, she is also committing adultery when she attempts an affair outside of her marriage. Regan, although not as vigorous as her sister, is also very stubborn and attempts adultery. Even though Regan does not show her love for Edmund as openly as Goneril does, we can sense a connection between the two. When Cornwall is slain by his servant, Regan does not show shock or disbelief as we would expect - especially during a time when being widowed was a taboo - and simply moves onto Edmund; she almost seems happy at her husband's death. ...read more.

My analysis shows that as "good" characters reach their emotional apex, the "bad" characters find the mountain valley, and vice-versa. In doing so, Shakespeare is trying to teach us a lesson about humanity. Although "good" characters reach an emotional climax first, they also find their way down first. "Bad" characters are frozen at the climax, evening in death. In King Lear, although Lear dies at the end, he receives a moment of clarity when all is resolved and he rests in peace, however, Goneril, and Regan die at the height of emotion and do not live to see their resolution. Their relationship stay tense and neither dies in peace. Shakespeare's King Lear is considered one of his greatest works. Shakespeare in writing the play not only considered theatrical importance but also incorporated his many insights into the patterns of relationship. As the play progresses, Goneril and Regan's relationship digress and each find themselves trapped in an upward spiral of tension, like a balloon that keeps stretching but never pops. When we trace their relationship, we find that it grows inversely with Freytag's Pyramid. This special relationship between Goneril and Regan not only stimulates a climax for King Lear but also helps to deliver a tragic ending to this Shakespearian masterpiece. ?? ?? ?? ?? ...read more.