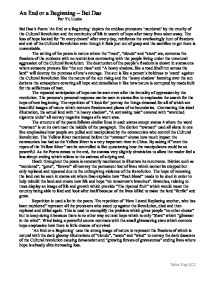 An End or A Beginning Analysis

An End or a Beginning - Bei Dao For Yu Luoke Bei Dao's Poem 'An End or a Beginning' depicts the endless protestors 'murdered' by the cruelty of the Cultural Revolution and the continuity of life in search of hope after many lives taken away. The loss of hope looked for "In every dream" after every day, reinforces the everlastingly hunt of freedom and end of the Cultural Revolution even though it feels just out of grasp and the sacrifice to get there is unavoidable. The setting of the poem in nature where the "trees", "clouds" and "stars" are, connotes the freedom of the outdoors with no restrictions contrasting with the people living under the unnatural aggression of the Cultural Revolution. ...read more.

Contrasting this ideal illustration, the actual land with "A heavy shadow", "A sorrowing mist" covered with "wretched cigarette stubs" all convey negative images of a worn area. The structure of the poem follows similar lines in each stanza except stanza 4 where the word "towmen" is on its own near the middle of the paragraph. The diction "towmen" used all alone in one line emphasizes how people are pulled and manipulated by the communists who control the Cultural Revolution. The Yellow River mentioned before the "towmen" shows how much impact the communists has had as the Yellow River is a very important river in China. By asking if "even the ropes of the Yellow River" can be controlled is like questioning how the manipulators could be so powerful. ...read more.

Repetition is used a lot in the poem. The repetition of 'Here I stand Replacing another, who has been murdered" represent all the protestors who stood up against the Revolution, died and then replaced and killed again. This is used to exemplify the problem which gives people "no other choice" but to keep doing it because there is no other way out and hope which is only "Stars" which "glimmer in the wind". Wind being a powerful source contrasts with the small glimmering stars which connote hope emphasize how there is little chance of survival. 'An End or a Beginning' uses the strong image of nature to represent the freedom of which is natural with the dark gloomy illustrations of "clouds", "mists" and "wind" to convey the dark disasters of the Cultural revolution causing devastation and "growing forests of gravestones" ending lives where hope is already slim increasing loss. Tisha Yap 6C2 ...read more.