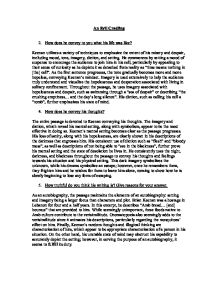 An Evil Cradling 2. How does he convey to you what his life was like? Keenan utilizes a variety of techniques to emphasize the extent of his misery and despair, including mood, tone, imagery, diction, and setting. He commences by setting a mood of suspense to encourage the audience to join him in his cell, particularly by appealing to their sense of curiosity as he depicts it as detached from reality as "time means nothing in [the] cell". As the first sentence progresses, the tone gradually becomes more and more hopeless, conveying Keenan's mindset. Imagery is used extensively to help the audience truly understand and visualize the hopelessness and desperation associated with living in solitary confinement. Throughout the passage, he uses imagery associated with hopelessness and despair, such as swimming through a "sea of despair" or describing "the crushing emptiness... and the day's long silence". His diction, such as calling his cell a "tomb", further emphasizes his state of mind. 4. How does he convey his thoughts? The entire passage is devoted to Keenan conveying his thoughts. ...read more.

In this excerpt, he describes "Arab bread... [and] houmus" that are provided to him. While seemingly unimportant, these foods native to Arab culture contribute to the verisimilitude. Onomatopoeia also seemingly adds to the verisimilitude since it animates his descriptions, particularly regarding the mosquitoes' effect on him. Finally, Keenan's random thoughts and illogical thinking are characterization of him, which appear to be appropriate characterization of a person in his situation. On the other hand, his unstable state of mind may obstruct his capability to accurately depict the setting; however, in serving the purpose of an autobiography, it seems to fulfill its duty. Testament of Youth 1. What techniques does Brittain use to give her readers an impression of her surroundings? Brittain utilizes a variety of techniques to emphasize her point, including imagery, juxtaposition, tone, mood, diction, and symbolism. The title initially gives off the impression of prosperity, the peak of life, and sets a hopeful tone. As soon as the extract commences, she immediately juxtaposes the hopeful mood she initially set by using imagery associated with death and depression in her descriptions of "heavy shower[s]", the "hospital", and "the roads [being] liquid with...mud". ...read more.

She maintains a uniform tone of dullness and focuses on proving to her audience the reality of war, rather than tell a story, which would be a novelist's main purpose. Finally, the fact that the Testament of Youth is an autobiography comes to show why her methods would differ than those of novelists. 3. Count the number of sentences where you could be sure that she is recording what actually happened. Although the majority of the extract focused on the general events or impact of war, it could still be considered a recording of Brittain's experience as a nurse in France during the war. The extract begins with direct descriptions of specific events, such as "heavy shower[s]... as [she] arrived at Etaples with three other V.A.D.s" and the "roads [being] liquid with such mud..." which all leads to verisimilitude. "The noise of distant guns..." also creates sound imagery, adding to the appearance of truth in the passage and helping the audience feel as though they were there themselves. The purpose behind actually recording what happened could be to show the reality of war, without glorification, which is what propaganda constitutes and is done by the government to convince people to join the war effort. ?? ?? ?? ?? ...read more.