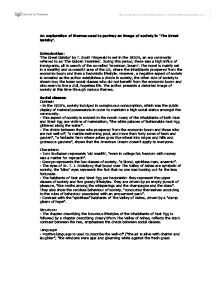 An exploration of themes used to portray an image of society in 'The Great Gatsby'. Introduction: 'The Great Gatsby' by F. Scott Fitzgerald is set in the 1920's, an era commonly referred to as 'The Golden Twenties'. During this period, there was a high influx of immigrants, all in search of the so-called 'American Dream'. The novel is mainly set in a wealthy and successful area of the US, where the inhabitants prospered from the economic boom and lives a hedonistic lifestyle. However, a negative aspect of society is revealed as the author establishes a divide in society, the other side of society is shown too; the lower social classes who did not benefit from the economic boom and who seem to live a dull, hopeless life. The author presents a distorted image of society at this time through various themes. Social classes: Context: - In the 1920's, society indulged in conspicuous consumption, which was the public display of material possessions in order to maintain a high social status amongst the community. ...read more.

as opposed to the negative, depressing descriptions of The Valley of Ashes (the word "ash" is repeated for emphasis, "foul", "unprosperous and bare"). Technology: Context: - During the 1920's, technology was developing rapidly, with advancements in medicine, transportation and manufacturing. - It is implied that society at the time was unable to keep up with the dramatic technological breakthroughs, as reflected by the car crash after Gatsby's party, which resulted in "a new coup�", "violently shorn of one wheel". Characters: -Myrtle is killed in a car accident, which may also show that society was unable handle the advancements in technology. This also reflects on the limitations of legislation at the time; it was only in 1939 that laws prohibiting drunk driving were introduced in the US. Structure: - The car crash after Gatsby's party may foreshadow the collapse of society and the economy in later years. Language: - Gatsby is said to have a Rolls-Royce, described as a "brisk yellow bug". The colour "yellow" may represent money, portraying Gatsby's immense wealth. This contrasts with "the dust-covered wreck of a Ford which crouched in a dim corner" in Wilson's garage. ...read more.

- Gatsby had to resort to a life of crime in order to live up to Daisy's expectations of social status which shows the materialism and corruption of society. Language: - A sense of disarray and panic is created after Tom punches Myrtle, "bloody towels", "a long broken wail of pain", reflects the disorder and chaos introduced to society as the level of crime rose. Religion: Context: - Following the rapid development of science and technology, many religious values were abandoned. The advancement of the entertainment business, especially in terms of music, literature, fashion and films led to the alteration of many social and moral views. Characters: - The eyes of Dr. T. J. Eckleburg watch over The Valley of Ashes- perhaps they are symbolic of God, who also watches over everyone? Alternatively, they may be representative of the shift of faith, from God to money and materialism in the 1920's. Conclusion: To conclude, the author depicts an image of a divided of society, torn apart by inequality and decaying social and moral values through several key themes in the novel. Perhaps it is the rapid advancement of technology as well as culture that caused society to splinter, leaving behind those who were unwilling and unable to reform. ?? ?? ?? ?? ...read more.