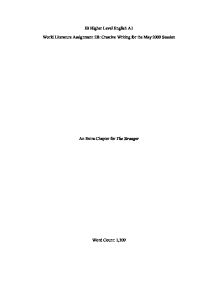 An Extra Chapter For THE STRANGER

IB Higher Level English A1 World Literature Assignment 2B: Creative Writing for the May 2009 Session An Extra Chapter for The Stranger Word Count: 1,309 It was the roaring sound of the gun that caught the attention of the other Arab. He was stooping behind a rock close to where the spring was. The blazing sun made it impossible for me to catch what he was mumbling about. He turned and tore off in the opposite direction; leaving me and the deceased Arab in peace. I looked at the corpse and wondered how Maman looked in her blood-red earth spilled coffin. It was distinctly at that very moment that the mighty sky tore open shedding sprinkles of water upon me. I stood there for quite some time, devouring the absence of weight the sun had pressed onto me for so long. I waited for the Arab to come back or for at least something to happen; but nothing- the body lay still as I walked my way back to the bungalow; revolver still in hand. When I returned to the bungalow, the women were taking a nap and both Raymond and Masson were drinking red wine and smoking unfiltered Montecristo cigars. Masson almost choked on the smoke when he saw the gash over my eye that the Arabs blistering knife had made. ...read more.

I turned to go but he suddenly said, "Do you believe in God? I had almost stopped believing but he gave me a reason not to." And with saying that, he went back to his little shabby house where the Spaniel could be heard barking. Marie was slumped between the bed cushions; wearing a long sleeved shirt. My desire to want her increased even more. Her stunning appearance attracted me as strongly as two magnets attract each other. We spend about three hours on the bed. Sleep came over me but Marie's voice kept waking me up. I told her to repeat herself because I only caught half of what she said. "Will you marry me?" The doors of unhappiness now truly burst open, and the policemen dragged me out of bed. I looked at Marie, confusion clearly visible in her eyes; that and the lack of sleep annoyed me. Statement of Intent For my world literature 2 paper, I am doing an Imaginative or Creative Writing: an extra chapter in the novel- The Stranger. The extra chapter commences right after chapter six of part 1, immediately preceding part 2. It is a connection between the two parts and deals with the aftermath of when Mearsault shot the Arab. ...read more.

Firstly, narration is in first person and is limited to Mearsaults own thoughts and perceptions. His description of the other characters is entirely subjective. Secondly, foreshadowing can be seen often in this extra chapter. For instance, Salamano asking the protagonist if he believes in God after he found his Spaniel is similar to the part where the Chaplain keeps rising similar questions to Mearsault when he is in prison. Thirdly, focusing on the absurdity of Mearsault was a major component that had to be kept in mind when writing the chapter. This was settled by focusing Meursault's attention on his own body- his interest in his physical needs, on his physical relationship with Marie, on the weather, and on other physical elements of his surroundings. For instance, in the second paragraph Mearsault talks about how delightful it was when there was a sudden rainfall and the weight of the sun had been finally lifted from his back- a subtle irony for we know how much trouble the sun had got him into. The style, language, form, register, and audience have been tried to match the way Albert Camus actually wrote the "The Stranger" to give the reader the same sensuous and absurd feeling. It is written in such a way that if a reader who hasn't read the book before should not be able to differentiate this extra chapter from the rest of the book. ...read more.