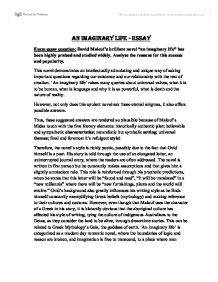 An Imaginary Life - Essay Exam essay question: David Malouf's brilliant novel "an imaginary life" has been highly praised and studied widely. Analyse the reasons for this success and popularity. This novel demonstrates an intellectually stimulating and unique way of asking important questions regarding our existence and our relationship with the rest of creation. 'An imaginary life' raises many queries about universal valves, what it is to be human, what is language and why it is so powerful, what is death and the nature of reality. However, not only does this opulent novel ask these eternal enigmas, it also offers possible answers. Thus, these suggested answers are rendered so plausible because of Malouf's Midas touch with the five literary elements: historically authentic plot; believable and sympathetic characteristics; naturalistic but symbolic setting; universal themes; final and foremost it's refulgent style! Therefore, the novel's style is richly poetic, possibly due to the fact that Ovid himself is a poet. His story is told through the use of an elongated letter, an uninterrupted journal entry, where the readers are often addressed. The novel is written in first person but he constantly makes assumptions and that gives him a slightly omniscient role. This role is reinforced through his prophetic predictions, when he states that this letter will be "found and read", "It will be translated" in a "new millennia" where there will be "new furnishings, plants and the world will evolve." ...read more.

It thunders and I say, it thunders. The Child is otherwise. I try to think as he must: I am raining, I am thundering, and am immediately struck with panic, as if losing hold of my separate and individual soul, in shaking the last of it off from the tip of my little finger." This quote shows the idea that regardless of race, age, and behavior, a young wild child could teach an elderly man, brought up in 'civilization', how to break the limits of one's self and reach the pinnacle of satisfaction in this world. It gives the novel its harmonious and enthralling nature. This attraction is also achieved as Ovid enters the 'other world' where he finds true euphoria, and the immense openness that he once thought of as a desolated hell became his source of ultimate gratification. The idea that great imagination lies in simplicity is also explored in the plot of the novel, however, it is from this simple plot that the complex conundrums and theoretical themes are created. This journey is therefore truly inspirational to the readers; it provides an escape from the constrictions of conforming to science and civilization and instead opens a gate into the eternal bliss. ...read more.

It is a different world. Somehow it seems closer to the first principle of creation..." and by learning this new tongue he has overcome one of his boundaries, thus also showing the power of language. In one incident, Ovid dreams himself to be a pool of water that the Child drinks from, and this symbolizes a step being made in Ovid's journey of self, while also indicating that the boy is learning from Ovid, he is seeing his own reflection in him and gaining civilized traits. (Do I need to work more on this paragraph?) In conclusion, it poses no difficulty in seeing why this ingenious piece of literary work has gained immeasurable success and popularity. It breaks new ground in combining the five elements of literature, to create a visionary masterpiece. It is said by the great Albert Einstein that "Imagination is more important than knowledge. For while knowledge defines all we currently know and understand, imagination points to all we might yet discover and create." This novel acts as reinforcement to this point, it shows the readers the importance of freeing oneself from limitations and gaining and giving the most of life. Most importantly, though: "Imagination will often carry us to worlds that never were. But without it we go nowhere." - Carl Sagan. Mohamad Naji ...read more.