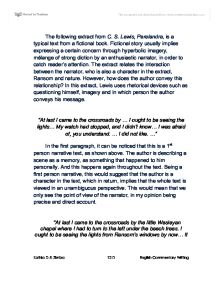 The following extract from C. S. Lewis, Perelandra, is a typical text from a fictional book. Fictional story usually implies expressing a certain concern through hyperbolic imagery, m�lange of strong diction by an enthusiastic narrator, in order to catch reader's attention. The extract relates the interaction between the narrator, who is also a character in the extract, Ransom and nature. However, how does the author convey this relationship? In this extract, Lewis uses rhetorical devices such as questioning himself, imagery and in which person the author conveys his message. "At last I came to the crossroads by ... I ought to be seeing the lights... My watch had stopped, and I didn't know... I was afraid of, you understand. ... I did not like. ..." In the first paragraph, it can be noticed that this is a 1st person narrative text, as shown above. The author is describing a scene as a memory, as something that happened to him personally. ...read more.

"... We have all known times when inanimate objects seemed to have almost a facial expression, and it was the expression of this bit of road which I did not like. ..." Throughout the text, Lewis uses a lot of internal monologue. This is a very effective device in first person narrative. By using this Lewis' delivers a direct thought or feeling to the reader for example: "... I did not like. "It's not true," said my mind, "that people who are really going mad never think they're going mad."..." "... A childish, whining thought arose on my mind: why was he not out at the gate to welcome me?..." This two passages describe how the author is feeling about the situation he's in i.e. the possibility of him getting mad and that he did not want to be seen in that situation. And as he had a childish thought of worry of why isn't Ransom at the gate waiting for him. ...read more.

The second paragraph starts by updating the reader of where the main character is situated. At this point he's already in the cottage. From it had been read so far, the reader should understand that the cottage was the destination of the author. Hence, it could be deduced that is where he lives, from this assumption, it may be assumed also that Ransom lives with him, the author. The above piece of extract reveals also that Ransom as some kind of connection with the narrator, by this I mean intimate relationship, perhaps a son, brother, father or even a close friend. The degree of intimacy referred before would be understood by the anxiety the reader has when explaining why he was looking forward to getting home and seeing him. The effect of imagery, internal monologue, first person narrative and the setting created, gave rise to an effective understanding of the text. No doubt that these techniques used are extremely helpful in a fictional piece of writing. ?? ?? ?? ?? Kathia D.E. Zimba 12 D English Commentary Writing ...read more.